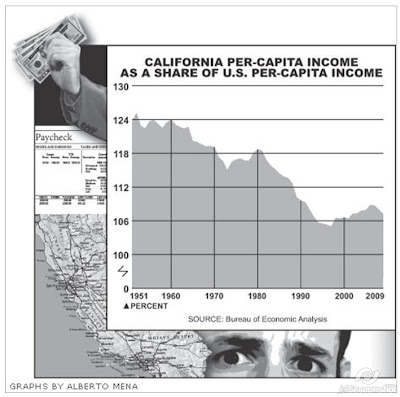 I personally didn’t know that much about what happened in California to produce the prosperity David Brooks writes about here, until I checked out this article at NewGeography.com. It's pretty much a conservative hit piece on progressives. Notice the decline in income from the graph on the right during the Reagan years. Isn't that odd?
What Brooks does write about, the attitudes people had back then, rings true in some ways from what I remember. In the meantime, it should be a wake-up call for anti-government tea party libertarian extremists.

NY Times: Between 1911 and the ’60s, California had a series of governors — like Hiram Johnson, Earl Warren, Goodwin Knight and Pat Brown —who were pro-market and pro business, but also progressive reformers.

They rode a great wave of prosperity, and people flocked to the Golden State, but they used the fruits of that prosperity in a disciplined way to lay the groundwork for even more growth. They built an outstanding school and university system. They started a series of gigantic public works projects that today are seen as engineering miracles. These included monumental water projects, harbors and ports, the sprawling highway system and even mental health facilities. They disdained partisanship. They continually reorganized government to make it more businesslike and cost effective. “Thus,” the historian Kevin Starr has written, “California progressivism contained within itself both liberal and conservative impulses, as judged by the standards of today.”
Most important, California progressives focused on the middle class. By the end of these years, California enjoyed the highest living standards in the country. The core of the state’s strength was in the suburbs. Between 1945 and 1950 alone, the San Fernando Valley doubled in population.
California’s progressive model has been abandoned … Both parties helped kill off California’s pro-market progressivism ... In the 1960s … activists arose — hostile to suburbia, skeptical of capitalism.
Another assault on California progressivism came from the right. Conservatives refused to acknowledge the public sector’s role in creating the state’s prosperity. With Proposition 13 and other measures that cut taxes, they cut off revenue and pushed through structural reforms, making it hard for future administrations to raise funds. Many on the right became unwilling to think creatively about using government to promote prosperity. The result is a state in crisis.
The answer is to return to the tradition of pro-market progressivism that built modern California in the first place. The antigovernment conservatives and the unions have built institutions and bases of support. The heirs to the pro-market progressive tradition have not. What’s needed is not a revolution, but a restoration and a modernization of what California once had.