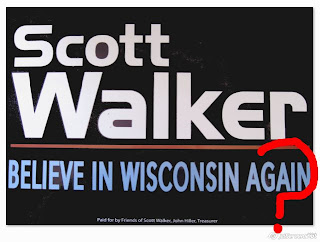 Why is it Republicans can rip Democrats for too many “unelected” czars, yet propose something as bizarre as a Whitetail Deer Trustee,” a variation of czar.

Republican candidate for Governor Scott Walker would appoint a “Whitetail Deer Trustee” to examine the deer population and wants the trustee to be “completely independent.”

The deer harvest plunged to its lowest levels since the early 1980s, and deer hunters blame various Department of Natural Resources policies designed to reduce the herd.

Said Walker: “Like most sportsmen, I’m tired of sitting in a deer stand all day and not seeing any deer.”

The inconvenience of waiting, and sitting, and freezing, and waiting some more is something no citified career politician should have to endure, and with just a little gubernatorial power, he can tweak mother nature. But, statistics are amazing things:

How would Walker have liked being a hunter in 1956, when hunters killed 35,000 deer … The truth: A deer season where most hunters return home with antlers is a very recent tradition. The Hunters Rights Coalition wants a deer population that sustains an annual harvest of 400,000 deer, a figure that was reached for the first time just 11 years ago. Can a diverse eco-system, (farmers, drivers and sprawl) handle that many deer?

The idea of unelected Walker “trustees” (czars) will be an interesting managerie of characters.

Over at Happy Cirucumstances, this incredible tidbit:

Walker's newest mailer calls Neumann a "seasoned" politician, apparently in hopes that people will forget Walker's 16 years of suckling on the public teat. Look past the fact that politics been berry, berry good to Scott Walker and that he's seasoned enough to have managed himself an in-ground pool.