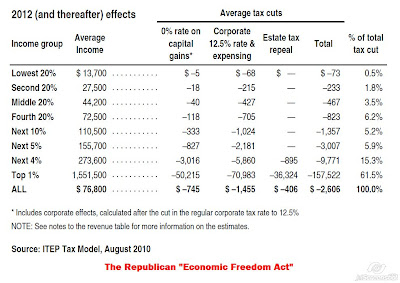 There is nothing I can add to this insane idea of "freedom." Citizens for Tax Justice:

On April 15, Rep. Jim Jordan (R) and Rep. Jason Chaffetz (R) introduced H.R. 5029 “The Economic Freedom Act,” with the blessing of the House Republican Study Committee. This report finds that H.R. 5029 would add almost $7 trillion to the national debt over the next ten years, not counting other legislation to make all of the Bush tax cuts permanent (which the sponsors also support). By the second year it's in effect, about 62 percent of the benefits would go to the richest 1 percent of taxpayers, and about three fourths would go to the richest 5 percent. H.R. 5029 proposes to do the following:

Cut the payroll taxes that pay for Social Security and Medicare in half. (This particular tax cut is for one year only).

Completely eliminate taxes on capital gains, for both individuals and corporations.

Eliminate almost three-quarters of the corporate income tax by (a) allowing businesses to write off equipment purchases immediately, rather than gradually, and (b) reducing the regular corporate tax rate to 12.5 percent (from the current 35 percent).

Repeal the estate tax, a tax that falls almost entirely on the nation’s wealthiest families.

Citizens for Tax Justice has analyzed the effects that H.R. 5029 would have on federal deficits and debt: The bill would add a staggering $6.9 trillion to federal deficits and debt over the upcoming decade. That’s $6,884,000,000,000 in additional government borrowing over the next ten years, equal to almost $23,000 in added debt for every man, woman and child in our country.

Starting in 2012, more than three-quarters of the proposed tax cuts would go to the best-off five percent of all taxpayers, with 62 percent going to the top one percent).

“Of course, these estimates assume we’d still have a working government if this bill were enacted,” noted CTJ director Robert S. McIntyre. “In fact, enactment of the Endless Borrowing Act would be a catastrophe for American families and our country’s survival. Some might ask why we’d bother to spend the time to analyze such an obviously irresponsible and unfair tax plan,” McIntyre said. “That’s a reasonable question. But since the plan’s sponsors claim that it was introduced ‘in conjunction with’ a congressional caucus that includes two-thirds of all House Republicans, well, it seems necessary to take H.R. 5029 at least slightly seriously.”