Van Hollen Blames Victim of DA Ken Kratz for not Following Up!!! 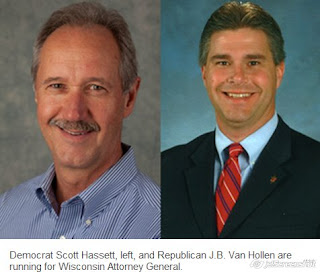 Incumbent Attorney General JB Va Hollen launched a statewide media offensive this week in which he repeatedly blamed a domestic abuse victim for his lack of action in the Ken Kratz ‘sexting’ scandal. Van Hollen made the remarks in response to reporters’ questions as to why he took no action when police first notified him of Kratz’s predatory behavior nearly a
year ago.

Hold onto your seats, you won’t believe Van Hollen’s unquestioned statements to the press:

“The other aspect of this, that I think people need to remember, is the repeat victim in this case is somebody who could have come forward any time and said ‘Office of Lawyer Regulation didn’t do anything…so at some juncture, I would like to believe that she would have come forward or someone related to her would have come forward. She was certainly advised of various levels of recourse, things that could be done, what was going on, continually kept in the loop, had points of contact with our office that she could access at any time, and provided written materials on a number of occasions laying out what various options she had.” Appleton Post-Crescent, 9.21.10

“In this case, where Ken Kratz had revictimized this one victim, we were providing her services with advice and counsel all along, in this case, and keeping her posted as to what was going on. We had informed her that this case had been turned over to the Office of Lawyer Regulation. I was equally surprised that we hadn’t been informed by her that they had chosen to do nothing. Obviously if we had learned of that, we would have taken action at the time.” WXOW La Crosse TV-19, 9.21.10

If Van Hollen had provided advice and counseling all along, then why didn’t he know the OLR decision or take action? According to Democratic AG candidate Scott Hassett:

"JB Van Hollen is blaming the victim for his own inaction and it’s inexcusable. At a time when he should have been a champion for the victim, Van Hollen instead chose to point the finger at her in an attempt to cover up his involvement in the Kratz ‘sexting’ scandal.”

The Wisconsin Department of Justice closed its investigation into Calumet County District Attorney Ken Kratz's sexually charged text messages to a crime victim without interviewing Kratz, according to records of the investigation made public Friday.