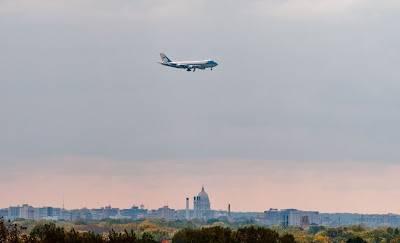 This incredible picture of Air Force One over the capital appeared on the State Journal's live blog of President Barack Obama's rally on Library Mall.

Here's the coverage from MSNBC's Rachel Maddow and Sam Stein.

I didn't see this get much coverage, but Obama had a suggestion for students at a local high schoo,l on how they could beat the Bears next time:

Obama surprised the football, volleyball and girls' tennis teams at LaFollette High School in Madison, Wis., by visiting their practice fields Tuesday. Students squealed in delight and jockeyed to shake the president's hand.

White House spokesman Bill Burton said Obama urged the football players to work hard in sports and school and to avoid the types of mental errors that caused the Green Bay Packers to lose Monday to his favorite team, the Chicago Bears.