Bush Tax Cuts equal the Money it Takes to Save Social Security...we already know how the Republicans will vote. 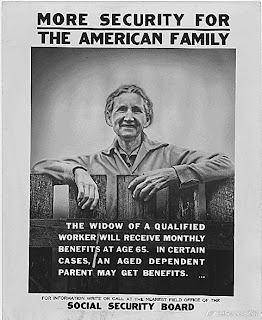 When it comes to Social Security, I am endorsing the plan backed by radio host and author Thom Hartmann, where we lower the age of retirement to around 55, almost double the benefits, and lift the cap completely. Lowering the age would open the market for a new generation of job seekers and raising the benefit would boost spending and the economy. Having said that, the current atrophied mind set of politicians is squarely focused on CUTTING benefits and keeping workers...at work.

Ezra Klein recently pointed out the problem we have with those planning to save Social Security:

You could work longer. Raising the Social Security retirement age has become as close to a consensus position as exists in American politics. Social Security provides disability insurance and survivor’s benefits, but when people talk about it, they tend to be referring to its role as a program that provides income support to retirees. The average monthly benefit of $1,170 replaces about 39 percent of the person’s pre-retirement earnings. Over the next two decades, the “replacement rate” is slated to drop to 31 percent. That is less than in most developed countries -- the Organization for Economic Cooperation and Development ranks it 25 out of 30 member nations. The system, in other words, is not that generous, and it’s becoming less so every year.

The issue isn’t that Social Security is spending too much or that we’re living too long. It’s that we’re not having enough children (or letting in enough immigrants). As Stephen C. Goss, the system’s chief actuary, has written, Social Security projects an imbalance “because birth rates dropped from three to two children per woman.” That means there are relatively fewer young people paying for the old people … this shortfall is basically stable after 2035.” In other words, we only have to fix Social Security once.

To put that in perspective, the Center on Budget and Policy Priorities calculates that it’s about as much as George W. Bush’s tax cuts for the rich will cost over the same period. Saying we can afford those cuts -- which is the consensus Republican position -- but not Social Security’s outlay is nonsensical. Coming up with 0.7 percent of GDP isn’t a crisis. It’s a question of priorities.

I could end the story here, but Klein continues with this critique of Paul Ryan’s plan:

Start with the basic rationale for raising the retirement age. As Rep. Paul D. Ryan, R-Wis., has argued, when Social Security was signed into law, the retirement age was 65 and life expectancy was 63. “The numbers added up pretty well back then,” he said on Fox News. But that’s misleading. That figure was driven by high infant mortality. If you were a white male who’d made it to age 60 in 1935, you could expect 15 more years going forward. If you’re a white male who lives to 60 today, you can expect 20 more years going forward.

An August survey from Greenberg Quinlan Rosner Research tested reactions to a variety of Social Security fixes. One of the options was raising the retirement age to 70. Two-thirds of respondents opposed it. Another option was eliminating the cap on payroll taxes so that well-off workers pay the tax on their full income, just as middle-income workers do now. A solid 61 percent supported it.

That’s almost the reverse of the conversation in Washington, where affluent people who like their jobs propose cutting benefits for the poor (which is, after all, what raising the retirement age would do) rather than lowering benefits or increasing the payroll tax on, well, themselves.