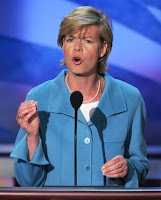 It looks like Wisconsin voters are up for getting sidetracked with "gay bashing" this time around when you might have thought economic issues would have been front and center.
The Young Republicans are trying to make it easier to find our gay Representative, Tammy Baldwin.

Republicans have filed a challenge to U.S. Rep. Tammy Baldwin's nomination papers. The Young Republicans of Dane County allege Baldwin, a Madison Democrat, listed her campaign office as her address on the papers rather than her voting address.

That sounds innocent enough, until…

However, state Government Accountability Board spokesman Reid Magney says state election officials have allowed Baldwin, who is openly gay, to use her campaign office as her address for years because she received threats after she was first elected in 1998.

The Young Republicans only want Baldwin's voting address. They didn't mean anything by it.
Posted by John Peterson, Democurmudgeon at 7/17/2010 11:57:00 AM