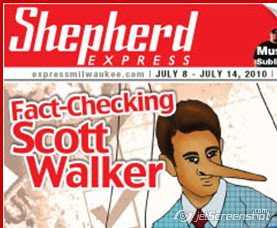 I've rarely done a one line story before, but there is too much to "borrow" from the Shepherd Express fact checking article on Republican gubernatorial candidate Scott Walker. Aw what the hell, one short example:

Claim: Walker says that as governor he wants to decrease taxes on employers, property owners, wealthy investors and retirees.

Reality: This makes for a great sound bite on the Republicancampaign trail, but Walker’s tax proposals would blow a $5 billion hole in the state budget, according to research conducted by OWN. First off, Walker would inherit a $2.3 billion deficit. Then he wants to slash the income tax for the top 1% of earners, which would cost the state $287 million over the biennium. He also wants to reopen the “Las Vegas loophole” to reward Wisconsin companies that set up phony offices in states without a corporate income tax to avoid paying Wisconsin state taxes. That move would set the state back about $375 million.

Then he wants to roll back the capital gains tax paid by the state’s wealthiest people. Cost to the state over two years: $243 million. Walker also wants to phase out taxes on retirement income—regardless of the retiree’s wealth—which would cost the state a whopping $920 million over the course of two years. And Walker’s latest gimmick is to put the sales tax from new cars into the transportation fund, which would take more than $1 billion out of the state’s general fund.

Total cost to the state: $5.125 billion during Walker’s first two years in office.