Republicans Like the Nuclear Threat by Russia just the way it is Right now. On with the Elections. 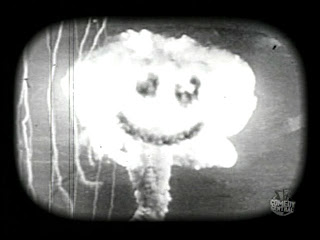 Thank God for Mitt Romney!
Tough on terrror! Tough on image and rhetoric!

Financial Times: Obama’s signature arms control achievement – a nuclear weapons treaty with Russia known as “New Start” – requires Republican votes if it is to be ratified by the Senate … But this month the deal was savaged by Mitt Romney … said the treaty gave Russia “a massive nuclear weapon advantage over the US”. He added: “It must not be ratified: the security of the US is at stake."

Whew, dodge a bullet there. Thank you Mitt, thank you for protecting us.

But the overplayed "go slow approach" by Republicans is another sign the Party is controlled by extreme paranoia.

Jon Kyl of Arizona and John Thune of South Dakota … wonder if that the administration might have agreed to things with the Russians it is now trying to hide.

But the Obama administration covered that GOP scar tactic as well:

AP: A copy of the unclassified passages of the State Department report (said this): "The costs and risks of Russian cheating or breakout, on the other hand, would likely be very significant," the report said. Russia would face financial and international political costs if it violated the treaty's provisions, with little to be gained militarily, it said … U.S. nuclear strengths would more than offset any Russian violations … James Miller, the Pentagon's leading authority on nuclear arms, on Tuesday outlined how the administration came to this previously undisclosed conclusion.

But the paranoid fears of the Republican Party, expressed by Sen. John McCain, are first advocating the creation of "a perfect world" before any nuclear treaty can be affective.

Sen. John McCain, R-Ariz., who asked in an incredulous tone why the Obama administration bothered to negotiate the treaty if Russian cheating is of no consequence. "Why have a treaty?" McCain boomed.

Repeating what was read aloud for McCain and fellow fear mongers on the Senate Armed Services Committee,

"Russia would face financial and international political costs if it violated the treaty's provisions, with little to be gained militarily, it said … U.S. nuclear strengths would more than offset any Russian violations."

The message: Obama is weakening the nuclear strength of the U.S. and ceding power to Russia. Oh, but just to be clear….

Late in his second term, however, President George W. Bush did propose a new, more detailed nuclear treaty with Moscow.