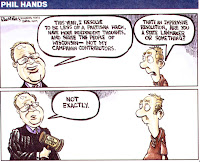 According to one Wisconsin Supreme Court Justice, Shirley Abrahamson, the conservative majority "improperly extends the authority of the Supreme Court."

That would translate into "activism," or legislating from the bench. At the least, it undermines the arbitration process in the case below, by keeping in place everything except job reinstatement, which would have probably worked itself anyway. Guess we needed the courts decree, their authoritative decision.

AP: Home improvement chain Menard Inc. does not have to reinstate a female executive who was fired after complaining about her pay, the Wisconsin Supreme Court ruled … On a 4-3 decision The court agreed with Menard's argument that the relationship between Dawn Sands and the company was so irretrievably damaged, there is no way she could establish an attorney-client privilege and work there again. "By accepting reinstatement, Sands would be forced to violate her ethical obligations as an attorney," Justice Michael Gableman wrote for the majority.

Do you think that might have occurred to Sands, or as the conservative court presumed, that she might have been unaware of "her ethical obligations as an attorney." Demeaning and condescending a bit, huh?

A state appeals court ruling that upheld the arbitration panel's order reinstating Sands to her position earning at least $175,000 annually after it concluded Sands had been paid less than male employees and she was fired for asserting her rights to equal pay.

This wasn't just someone who found herself getting paid less than male employees either:

In her discrimination claim, Sands alleged "Menard family officers" engaged in "mafia-like conduct" and John Menard's conduct was "so monstrous and reprehensible that it shocks the conscience," court records said.

It goes without saying, but the liberal activist justices would have left the judgment up to the existing process:

In the dissent, Chief Justice Shirley Abrahamson said the decision sets a bad precedent that undermines the arbitration process and improperly extends the authority of the Supreme Court.