One of the Best, Nicest, Complementary Non-Endorsements for Elizabeth Warren I've Ever Seen 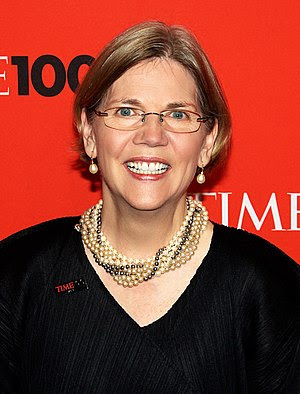 Image via Wikipedia
Just a refresher on the who, what, where, when, why of the story:

Elizabeth Warren’s supporters want President Obama to nominate her as the first head of a new consumer financial protection bureau created by the legislation he signed into law last week. They say that Ms. Warren, who conceived the idea and helped shepherd its passage into law, is the only acceptable choice to finish the project.

Bankers oppose her nomination for exactly that reason. Roger M. Beverage, head of the Oklahoma Bankers Association, said that Ms. Warren was widely respected in Oklahoma, where she was raised and is still remembered as a high school debate champion. But he said that his members did not believe she would understand the needs and concerns of community banks.

Here's what fascinated me so much to blog this oddity:

“Not that she’s not competent. Goodness gracious, I would never say that. She’s exceptionally bright. We just fear what she might come up with,” Mr. Beverage said. “She’s a partisan and she’s bull-headed and she’s opinionated. And she’s terrific. She’s a great advocate. We just respectfully disagree with her view of the world.”