The JournoList forum told the truth, and that's Frowned on by Protective Conservatives for Dullard Palin. 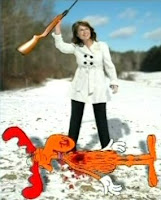 You would have thought the world came to an end, and the right wingnuts favorite village (Facebook) idiot had been disparaged by the liberal press. They would be profoundly wrong.

It's more like the truth hurts. A few quick examples:

400 top mainstream reporters and their activist buddies conspired in an attack against Palin the minute she entered the presidential race.

"What a joke," added Jeffrey Toobin, a staff writer at the New Yorker and a senior analyst at CNN.

Ryan Donmoyer of Bloomberg News warned that Palin's decision against aborting her baby with Down syndrome represented a threat to Obama because it was a "heartwarming" story.

Human Rights Watch's then-chief of operations, Suzanne Nossel, suggested that McCain be called the sexist: "I think it is and can be spun as a profoundly sexist pick. Women should feel umbrage at the idea that their votes can be attracted just by putting a woman, any woman, on the ticket no matter her qualification or views."

"OK, let's get deadly serious, folks," wrote Ed Kilgore, managing editor of the Democratic Strategist. "Grating voice or not, 'inexperienced' or not, Sarah Palin's just been introduced to the country as a brave, above-party, oil-company-bashing, pork-hating maverick 'outsider.' What we can do is expose her ideology?"

Nothing untrue here. That truth set Palin free, because everything they talked about above had been written about Palin. This ISN'T SECRET STUFF as suggested above and below. But that would mean it wasn't "cooked up" or created a "false picture" as suggested below.

And so it went — journalists from the Nation, Mother Jones, Time, Politico, Bloomberg cooking up approaches, arguments, "narratives" and templates to paint a false picture of the candidate.

At the same time, and while you read below, Obama cavorted with terrorists, was a Marxist, born in Kenya, was a socialist, wasn't an "executive" (neither was Lincoln) and was an latte sipping softy on defending the country. Let the phony outrage begin….

Nominally competitors, these supposedly impartial media mavens colluded in a way that would put airline or insurance officials in the dock for anti-competitive practices. They engaged in activism instead of fact-finding and mixed incestuously with activists whom they also should have been covering impartially.

Worst of all, they deprived millions of Americans of the information they needed to size up this new face on the political scene and determine if she really was a candidate who represented their interests. That still remains to be done — and the country is poorer for it.

The "Facebook candidate" hasn't been sized up yet? Really?