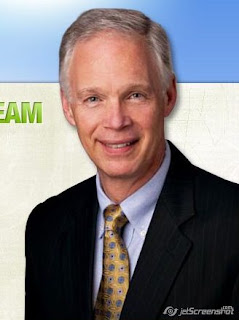 What is still a mystery to me is the general public acceptance of Republican BP apologists?
Is "smaller government" so important to these people that they would give up environmental controls to prevent any future disasters? Apparently. That's why senate candidate Johnson is running neck-and-neck with Sen. Russ Feingold, even without a known list of legislative solutions to America's problems. The conservative bar for qualified candidates is pretty low, or nonexistent. Wisconsin State Journal:

Senate candidate and Oshkosh businessman Ron Johnson reportedly owns thousands of dollars of stock in BP. Johnson owns stocks worth between $116,000 and $315,000 in BP, the British petroleum company behind the Gulf oil gusher, according to financial reports filed Friday. At a public forum in June, both Johnson and challenger Dave Westlake criticized the federal government's treatment of BP. Johnson accused the government of circumventing "the rule of law" in its treatment of the oil giant, according to an Associated Press report. And he has said it's not the time to be beating up on oil companies.

John Kraus, Feingold campaign senior strategist, said in a statement, "And now after trying to keep it a secret, it has been revealed that he has significant and direct personal financial interest in British Petroleum, proving without any doubt that he would put big oil profits, and his own financial interests, ahead of Wisconsin."