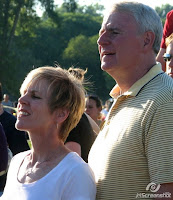 While conservatives slime balls salivate over the prospect of seeing both Barrett's in the unemployment line, something you wouldn't wish on anybody, you can't help but wonder how many other dedicated experienced teachers have been let go due to the Republican caused recession.

jsonline: Among the more than 400 Milwaukee Public Schools teachers who were recently laid off is Kris Barrett, the wife of Milwaukee Mayor Tom Barrett.

Kris Barrett introduced her husband at last month’s state Democratic convention and said if elected governor he would ensure Wisconsin has strong schools.

She taught at Clara Barton Elementary School from about 1984 to 1992 … Kris Barrett returned to MPS in 2007 and most recently taught at H.W. Longfellow School.