Extension of Unemployment Insurance only thing left in JOBS BILL. Tsunami of Jobless coming in Fall in Time for Elections.

Beside unemployment checks, everthing else was negotiated away in a jobs bill that could have saved millions of families the heartbreak and fear of not having an income.

There's a lot of BS going around about how "economic uncertainty" has stopped supply side capitalists from hiring and making new products. It's a pathetic excuse to explain why supply side economics isn't happening right now. But what about the economic uncertainty felt by Americans who fear they may lose their jobs due to the continued mismanagement of Republican lawmakers?

Take a look at what could have been in the bill to keep Americans working. 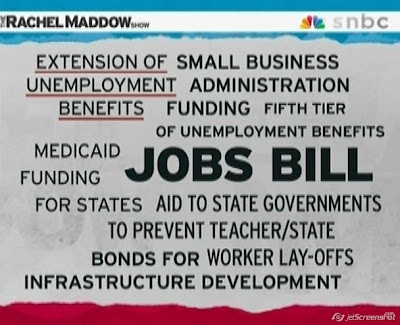