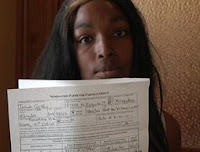 Leshuh Griffin's frank, self description will not be allowed to "inform" voters. Go figure.

An independent candidate running for the state Assembly in Milwaukee won't be able to describe herself on the ballot using the statement "NOT the 'whiteman's bitch.'"

State law allows independent candidates to have five words describing them placed after their name on the ballot. Ieshuh Griffin argued that the phrase was protected free speech. But the state Government Accountability Board said Wednesday that the statement was pejorative and not allowed.

But believe it or not, it was close…

The board is composed of white, retired judges. Three of them voted to allow the description but two did not. She needed four votes. Griffin says she will seek an injunction in federal court.

AP wrote the slogan this way: "NOT the 'whiteman's b----.'" Are they kidding? Still the panel of white judges appeared to appreciate Ieshuh's originality.

(One board member and) a retired state appeals court judge, said he didn't find the wording to be "particularly offensive." (Another agreed.) "She says a lot in five words. It wasn't pornographic, it wasn't obscene and I didn't interpret it as racial."

(Still another, the board chairman, said) "Isn't she saying, 'I'm not under the white man's direction? I'm independent of that.' Isn't that what she's saying?"

Yes, that's exactly what she was saying.

Ieshuh: "I'm not making a derogatory statement to a group of people or an
ethnic group," she told the board. "I'm saying what I am not. It's a term the constituents identify with."

I'm just saying... Check out how she pleads her case based on historical references, at Wisconsin Eye
Posted by John Peterson, Democurmudgeon at 7/21/2010 07:03:00 PM