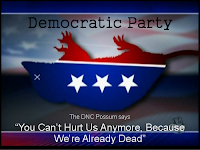 I know how much I would like to see Democratic voters strike back against the self destructive party antics of Republicans, but we're just not wired to ignore our calls for social justice.

Democratic voters in Wisconsin wanting to cause mischief for Republicans have some tantalizing possibilities to cross over and cast ballots in the upcoming primary … there's nothing illegal about a Democrat voting in the Republican primary, or vice versa, in Wisconsin and 16 other states … But, at least publicly, party leaders disavow the practice known as tactical voting as unseemly and nearly impossible to pull off. "I think that's an old wives tale," said Wisconsin Democratic Party Chairman Mike Tate. "I just don't think that ever happens in significant numbers."

It is a thought that has crossed the conniving minds of lying Republican leaders.

Even when conservative talk radio giant Rush Limbaugh launched "Operation Chaos" in February 2008 … there was no clear indication it had any effect. Earlier this year in Utah, Republican state Rep. Carl Wimmer posted a suggestion on Facebook, which he later disavowed, urging Republican voters to cast ballots in the Democratic primary to support a challenger to five-term incumbent Rep. Jim Matheson.

Republicans would like to "project" their own inclinations onto the Democratic Party, and the possibility of election mischief, but it's not in our DNA.

Mike Moran, a Democrat in Wausau, laughed at the idea that Democrats would try to interfere with Republican primaries. "I haven't really heard that," he said.