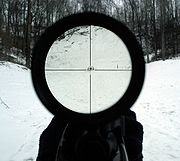 I’m not advocating limiting anyone's free speech rights. But certain kinds of speech have resulted in people getting killed. We’re talking about groups that specifically insinuate, in their righteous opinion, someone is killing babies. It doesn’t take a genius to conclude the most effective way of stopping the “killings” would be the elimination of the doctors responsible.

It’s odd too that the press has bought into the wide eyed innocence of groups that just shrug their shoulders when something bad happens. Who honestly believes these anti-abortion groups sadly disapprove of murders that promotes their cause of getting rid of abortion doctors.

Isn’t it time we add these groups to the nation terrorist watch list? Isn’t the phrase “killing babies” code word for “kill the abortion doctors?” Of course. These groups have now been directly or indirectly identified as the backers of domestic terrorism. Their game plan has become more obvious and brazen, while their public statements have been noticably insincere. Thankfully, the new online press has started to write about the obvious:

Domestic Terrorism Strikes in the Assassination of Dr. George Tiller, by Michelle Kraus at the Huffington Post.

It is an act of domestic terrorism at its worst. Gunned down at his peaceful place of worship in Wichita, Kansas, Dr. Tiller was targeted as he served as an usher in church and his wife sang in the choir. Eight years of the provocation of the religious right have come home at a great cost to this country. Stirred up and fueled by the hysterical voices of those like Rush Limbaugh, fear and paranoia continue to reign as evidenced in this assassination.

Christian Fundamentalist Terrorism, By Shannyn Moore at the Huffington Post.

… it's time to start calling it what it is. When Jim D. Adkisson walked into the Tennessee Valley Unitarian Universalist Church with 76 rounds and a shot-gun, he killed 2 people and was charged with murder. His motive was "he hated the liberal movement" and was upset with "liberals in general as well as gays." He should have been charged with terrorism.Today George Tiller, a Wichita doctor, was killed INSIDE the lobby of his Wichita church. Reformation Lutheran Church became a crime scene; fundamentalist terrorism.

No Mercy, by Mary Mapes of the Huffington Post.

I felt just sick today when I saw the bulletin about the murder of Dr. George Tiller. Sicker still when I saw the "sympathy" letter issued by officials at Operation Rescue, the virulent anti-abortion organization that dogged this poor man for the past two decades. The statement said, "We pray for Mr. Tiller's family."

Operation Rescue forged an unholy alliance of sexually repressed super Christians, men who hate women and women who hate themselves and turned them into a supercharged army of bullies for Jesus. Tiller's clients often included couples who had been hoping to become parents but had their hearts broken late in pregnancy when they received horrifying medical news about their much-wanted babies. These people got no mercy from Operation Rescue. They were hounded and harassed, shoved and shouted at on the most heart-breaking day of their lives.

And now, finally, after all the heavy breathing about heaven and God, evil and innocence, Operation Rescue by all appearances has goaded someone into killing George Tiller. This is terrorism. And if we believe this is terrorism, we need to act like it's terrorism.

No Mercy, by Cristina Page, author of How the Pro-Choice Movement Saved America wrote:

One can only conclude that like terrorist sleeper cells, these extremists have now been set in motion. Indeed the evidence is already there. The chatter, the threats, the hate-filled rhetoric are abundant. In the last year of the Bush administration there were 396 harassing calls to abortion clinics. In just the first four months of the Obama administration that number has jumped to 1401.

And so the execution of Tiller, 67, is not only tragic but ominous. Eleanor Bader, co-author of Targets of Hatred: Anti-Abortion Terrorism, in an article in March for RHRealityCheck.org about clinics bracing for an uptick in violence after the election of Obama wrote, "immediately after Obama's election, Douglas Johnson, Legislative Director of the National Right to Life Committee, called him a "hardcore pro-abortion president." The American Life League dubbed him "one of the most radical pro-abortion politicians ever," and Father Frank Pavone of Priests for Life warned that Obama will "force Americans to pay for the killing of innocents." Americans United for Life, the Family Research Council and Operation Save America quickly joined the chorus."

For other "Assassination Agenda" stories, search this site using those key words.
Posted by John Peterson, Democurmudgeon at 6/01/2009 10:42:00 AM