Justice Thomas Must be Impeached 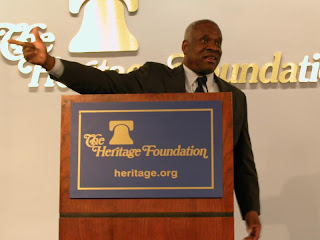 I don’t usually ask for taking dramatic action against someone for their God given opinion and right to say it, but when you’re talking about someone in the third branch of our government, it’s time to draw the line.

Justice Clarence Thomas has been such a reliable “right wing” vote on every issue to come before the Supreme Court, that it’s impossible to sit back and not call him on it. This IS judicial activism in its rawest state. Nothing can excuse him for his most recent decision and commentary on the strip search of a 13 year old girl in school. NOTHING. NY Times:

The strip search of a 13-year-old girl by officials at her middle school violated the Constitution, the Supreme Court ruled … in an 8-to-1 decision.

Only Justice Clarence Thomas would have ruled the search constitutional. “Preservation of order, discipline and safety in public schools is simply not the domain of the Constitution,” he wrote.

Justice Thomas also said Thursday’s decision provided the nation’s students a court-sanctioned hiding place. “Redding would not have been the first person to conceal pills in her undergarments,” he wrote. “Nor will she be the last after today’s decision, which announced the safest places to secrete contraband in school.”

Thomas is saying the Constitution stops at the school house doors. This is a very sick person. Looking back now, Anita Hill’s case just became a whole lot stronger when this misogynist dismissed the girls humiliating bra and underwear search on hearsay, and in violation of the Fourth Amendment’s ban on unreasonable searches. Jesus, what does a guy have to do before someone raises the question of his competence?