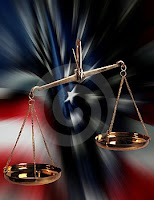 The press allows the talking point “activist judge” to float out there unchallenged. Democrats have steered clear of pointing out how ridiculous “activist” sounds when applying it to only one party, while Republicans pretend to have some divine right to Constitutional interpretation. Stop it. Stop it NOW. After watching the video clip of Bush 41 tout Clarence Thomas as an empathetic candidate for the Supreme Court, one would have thought the whole idiotic and embarrassing issue would have come to a screeching halt for Republican ideologues. Not in the wedge issue world of conservatism. This story has pushed me over the line, again:

USA Today: The top Republican on the Senate committee, Sen. Jeff Sessions, R-Ala., reviewing Sonia Sotomayor's nomination to the Supreme Court said Monday that he is concerned President Obama is driving federal courts "far to the left" bychoosing "activist" judges for the bench.

(Sessions) said Obama's judicial nominees, including Sotomayor and three others to the U.S. Court of Appeals, raise questions about what role a judge's background should play in deciding cases. “When he talks about wanting a judge to show empathy, that's very troubling to me."

Sessions appears to be repulsed by the human response “empathy.” Sessions would much rather ignore the more humanistic qualities of our founding fathers, and “actively” replace their Constitutional musings with a more sterile robotic reading, along the lines of Hal the computer from 2001 a Space Odyssey. After all, conservatives are devoid of ideology, sympathy, outrage and a sense of philosophical victimization.

But a strict constructionist view of the Constitution, a specifically conservative theory, is pure and unquestionable. Approaching the Constitution as though it were a living document, influenced by time and citizen attitudinal changes, is not what time traveling Republicans claim Madison and the others meant when they drew up their unbendable laws and etched them in stone tablets.

As far as the stone tablets are concerned, I further dispute the idea that God ordered Christ to do the etching, thus making our country a Christian nation. For those conservatives scrambling to search Google for more information, I just made this last point up.
Posted by John Peterson, Democurmudgeon at 6/16/2009 11:27:00 AM