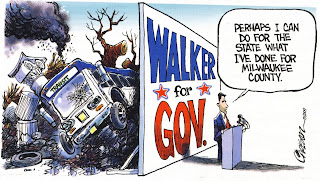 We know that Scott Walker continues to depend on the County Board to override his vetoes, just so he can claim in his campaign ads for governor that he personally hasn’t spent one dime of taxpayer money. He just lets someone else do it. Not a bad scam if you can get away with it. But it looks like the word is getting out on this conservative ideologues political con. Hold onto your seats, this one is a doozy.

Republican gubernatorial wannabe Scott Walker continued his penchant for hypocrisy Friday when he held a press conference in Milwaukee to tout the very same summer jobs program he tried to kill in his recent budget.

According to the Milwaukee Journal Sentinel, Walker vetoed $100,000 of funding for the program in his 2009 budget, before the County Board overrode his veto, saving the 350 jobs. On Friday, Walker held an outdoor ceremony at Washington Park to take credit for the 350 summer jobs that are being created in the county parks.

Passing the buck, the County Executive, in his veto message, said, “This is a school function and should be entirely funded by MPS. Supervisor Johnny Thomas responded, “Of course, the total cost to taxpayers would likely be about the same, whether levied by Milwaukee County or by MPS.”

But you won’t believe this:

However, the deadline to apply for the jobs had passed two weeks prior to Walker’s ceremony, meaning that the sole purpose of the event was to get Walker’s face on TV to boost his flailing campaign for governor.

Walker not only misled the public about his support for this program, but he gave thousands of job seekers false hope that there were still positions available this summer. After being inundated with calls, the county was forced to remove the summer job application information from its Web site.

Joe Wineke, Chair of the Democratic Party of Wisconsin said, “Scott Walker is so desperate for media coverage that he’ll say or do anything to get exposure, even if it means misleading the public and taking credit for the same program he tried to kill.”

Supervisor Thomas added, “Now, with the program a reality, it seems the County Executive has run to the front of the parade.”

I hate to sound fearful, but I’m really hoping the citizens of Wisconsin are paying attention this time.
Posted by John Peterson, Democurmudgeon at 6/03/2009 11:41:00 AM