WMC Hates Wisconsin so Much, they Would Rather be in Alabama. Labors Cheap There, That’s for Sure. 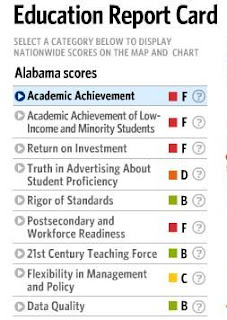 Bashing Wisconsin has been perfected and elevated to new heights by the states biggest business lobby Wisconsin Manufacturing and Commerce. And then they wonder why we can't attract new industry here. Wispolitics.com reports:

James Buchen says some Wisconsinites used to respond to efforts to cut taxes and government spending by saying dismissively, “You don’t want us to be more like Alabama, do you?” These days, being more like Alabama might not be such a bad thing, he says.
“In Alabama, people are moving in, jobs are being created, personal income is rising, and in Wisconsin, just the opposite is happening in all of those cases,” Buchen said in a new WisPolitics interview.

Here are some facts I collected in 2003 about the great state of Alabama:

Alabama voted for fewer social services, less education, and a shoddier legal system --- to become, that is, more like a third-world nation. But low as taxes are, the state will never be better at being an underdeveloped country than actual underdeveloped countries are … if Alabama heads into next year without additional revenues, students may have to learn without textbooks, prisoners may be released early, and people may start dying of preventable diseases … High Hopes, a program that offers after-school tutoring to students who fail the high school graduation exam, is being slashed … The health department is losing investigators who track tuberculosis, and sharply reducing restaurant inspections … (It’s) Nearly impossible for basic services, including courts, prisons and police, to operate. We should think hard about whether we want the whole nation to look like Alabama does this year or, worse, next year.

It is 48th in the nation in state and local revenue as a percentage of personal income Alabama's income tax kicks in for families of four earning just $4,600. Its property taxes are the lowest in the nation.

Sounds like heaven, doesn’t it Mr. Buchen? Even though a few years have passed, I’m still sure it’s a great state for businesses. But the schools...I'm not so sure. Of course, Buchen continued to bash the business climate in Wisconsin at the worst possible time; during a recession.

WMC also plans to go after the liability expansions, “It’s the kind of thing that’s going to send the wrong signals, tend to drive business out of our state and drive investors out of our state rather than attract them here,” Buchen said.

Trashing Wisconsin in the press is nothing new for Republicans and the states biggest business lobby. Their jaw dropping double team has everyone scratching their heads:

…liberal groups and Gov. Jim Doyle’s administration have accused WMC of bad mouthing the state and hurting its image around the country rather than doing anything constructive.

But for free market, deregulation conservatives, whining is fun.

But Buchen insists those perceptions would continue even if WMC were to remain quiet and said the group has been forced to amplify its complaints lately because of a state budget that he says is “one of the worst packages of public policies from a business standpoint” to come out in the past two decades.