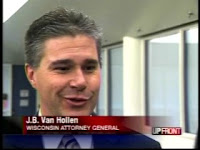 In an earlier blog, I passed along a story about Wisconsin's Congressional Representatives Jim Sessenbrenner and Paul Ryan, who came to the rescue of rural residents who complained their mail came later in the day because the Post Office centralized their distribution centers to save taxpayer money and a $2 billion budget shortfall. It appeared you can't save money at the expense of Republican voters. And hell, what were the Democrats thinking? Now the state attorney general is blaming Democrats for targeting his department. No, really, J.B. Van Hollen is blaming Democrats.
The DOJ saw its budget increase by 17 percent since 2007. The proposed cuts, described in the same terms Republicans use on Democrats, isn't a tax cut but less spending. Like Rep. Mark Pocan, co-chair of the Legislatures budget committee said, the cuts represent the "shared sacrifice" and "everyone seems to understand that except the Attorney General."-Wis. State Journal

Wispolitics.com: Republican Attorney General J.B. Van Hollen calls proposed cuts to the Department of Justice budget "unprecedented" and writes in an e-mail that the agency was treated inequitably and in a partisan manner by the Dem-run Joint Finance Committee.

Van Hollen wrote the cuts amount to a $13.5 million reduction over the biennium and represent about 10 percent of the agency's budget.

Because conservatives worry that someone else is getting something they're not, Van Hollen pulled the victim card:

That includes a new 5 percent cut affecting most state agency operations that, Van Hollen wrote, was not imposed on departments like Corrections, Military Affairs, DAs, Public Defenders, and Children and Families. Van Hollen wrote in the e-mail. "We never imagined that the Justice Department would be treated so inequitably and in such a seemingly partisan manner."

"Seemingly?" Either Van Hollen is not quite sure or he's just making it up. The underlying "fear," the emotion that guides all conservative thought, is that someone is getting something the DOJ isn't. Maybe the state is trying to bail itself out of a $6 billion deficit, created by a Republican administration that not only tanked 47 state economies, but the entire global economy.

It's so unfair that Republicans have to feel the pain of Democratic budget cuts too.
Posted by John Peterson, Democurmudgeon at 6/02/2009 02:21:00 PM