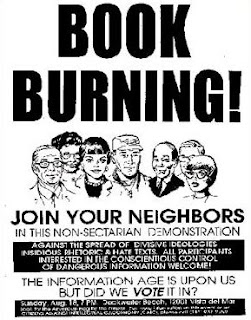 You can’t make this stuff up. We’re talking about a possible book burning by a group opposed to the local anti-God, gay loving community library. According to the Schoollibraryjournal:

A list of 82 sexually explicit and gay-themed titles will remain on the young adult shelves of Wisconsin’s West Bend Community Library following the board’s unanimous vote to reject efforts by local parents to restrict access to those books.

Library Director Michael Tyree (felt good) about the June 2 decision to shoot down a complaint filed by parents Jim and Ginny Maziarka. “In fact, the board voted to squelch the entire complaint. There will be no moving of materials, no labeling of materials, no disconnecting the Over the Rainbow link in our Web site, no filtering of Internet computers, and no multi-tiered library card system for minors.” Over the Rainbow is the name of a gay-themed reading list on the library’s Web site.

The nine-member board listened for close to three hours as about 50 people from both sides of the debate. “One local who spoke said I should be tarred and feathered and that J. K. Rowling should be shot,” says Tyree, who was the timekeeper at the gathering. “Others quoted scripture from the bible.”

The Maziarkas, who described their experience at the meeting as being on trial, are now using their blog WISSUP=Wisconsin Speaks Up to label the library an “unsafe zone” for kids.

They want to kill a British author? Tar and feather a the local librarian? It’s hard to believe that it could get even more bizarre, but it does. According to the American Library Association:

However, board members were made cognizant that same evening that another material challenge waited in the wings: Milwaukee-area citizen Robert C. Braun of the Christian Civil Liberties Union (CCLU) distributed at the meeting copies of a claim for damages he and three other plaintiffs filed April 28 with the city; seek the right to publicly burn or destroy by another means the library’s copy of Baby Be-Bop.

The claim also demands $120,000 in compensatory damages ($30,000 per plaintiff) for being exposed to the book in a library display.

The resignation of West Bend Mayor Kristine Deiss for “allow[ing] this book to be viewed by the public.”

Citing “Wisconsin’s sexual morality law,” the plaintiffs also request West Bend City
Attorney Mary Schanning to impanel a grand jury to examine whether the book should be declared obscene and making it available a hate crime.

Accusing the board of submitting to the will of the American Library Association and the American Civil Liberties Union, Ginny Maziarka declared, “We vehemently reject their standards and their principles,” and characterized the debate as “a propaganda battle to maintain access to inappropriate material.” A petition circulated by West Bend Citizens for Safe Libraries got 700 signatures and more than 1,000 on an anti-restriction petition from the newly formed West Bend Parents for Free Speech.

And you thought conservatives were against frivolous lawsuits.
Posted by John Peterson, Democurmudgeon at 6/08/2009 01:17:00 PM