Vouchers: Long Waiting Lists, No Accountability. What could Go Wrong? 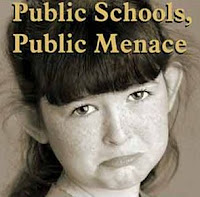 This story hits on two of my own basic arguments against any kind of voucher program that wastes my hard earned money (I'm using the language of Republicans).
The first premise is that parents aren’t that stupid. They trust public education, live near the schools and know they are accountable to the taxpayer.
The second premise, which never gets discussed, involves waiting lists for the best private school in the district. Some of these schools might have great reputations, with applications three or four times that of other private schools, but that leaves many families settling for the average or less desirable schools instead.

AP: A voucher program for New Orleans students in failing schools to attend private schools at taxpayer expense is costing the state less than budgeted this year. Projected to enroll up to 1,500 students, the program has fewer than half that number…634 students has received the scholarships and 89 more have been offered recent awards. Others are on waiting lists because they can't get into the schools they want.

These are just two of the many major drawbacks of the voucher school scheme.
Posted by John Peterson, Democurmudgeon at 11/09/2008 12:30:00 AM