Sometimes A Headline Says It All: Perry concerned by plans to limit greenhouse gases 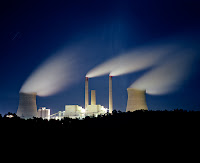 One of the biggest comebacks against the supposed free market system rhetoric shoved in our face from the conservative party may be a consumer’s complete inability to shop around for an energy provider. Utility companies always threaten to raise rates if environmental controls are forced on them, claiming the costs have to be passed on to the consumer. In most other industries, price increases would reduce their competitiveness in the market, keeping prices in check and affordable. Angry consumers in turn could shop around for better prices and service.
In most industrialized countries around the world, energy is partially or totally nationalized. Perhaps they know something we don’t. Take for example this story from Texas about controlling pollution. It’s a no brainer for most, but not Republicans. And like the auto industry that refused to change and become more fuel efficient in the face of rising costs, the energy industry refuses to budge from their use of outdated corporate models and inefficiencies. The grid breakdown was the warning shot now long forgotten.
Houston Chronicle:

President-elect Barack Obama is believed to be more receptive to clamping down on the gases that have been blamed for global warming. Perry warned the regulation of greenhouse gases, as outlined in a notice posted by the outgoing Environmental Protection Agency administrator last summer, would run Texas "right off the tracks, into the ditch." Perry said the Advance Notice of Proposed Rulemaking, posted in July, would harm the oil and natural gas production that is vital to the Texas economy and jeopardize jobs in the coal industry.

Sounds exactly like the argument given by the big three auto makers about fuel economy and pollution control doesn’t it?

He said national oil and gas supplies would be curtailed if the federal government were to impose a large tax burden on oil and gas companies. The U.S. Supreme Court ruled last year that the federal government had the authority under the Clean Air Act to regulate greenhouse gases. Last May, an EPA appeals board overturned a permit for a coal plant in Utah because the application failed to require any controls on carbon dioxide pollution.

Without regulation, the coal plant in Utah would have been built without any controls on CO2 pollution.
Damn big government.
Posted by John Peterson, Democurmudgeon at 11/26/2008 10:39:00 AM