Randy Newman was Right, "It's money that Matters" Especially when it Comes to CO2 Control 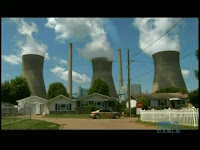 PBS's Frontline feature "Heat," an in depth look at our energy uses, and what we're eventually going to do about it. It wasn't pretty.
In this clip, we have a Chinese auto maker with no plans for a fuel efficient car.
A corporations dramatic expansion of building coal fired plants, who's first obligation is to its share holders and second to the public good.
And finally, an embarrassing moment by the Bush administration ideologues who were objecting to U.S. pollution controls if developing nations weren't held to the same standard. When those nations promised to control CO2, the Bush representatives were roundly booed for rejecting even that offer, the one they said they wanted. They suddenly had a change of heart though, a few minutes later, and were politely cheered. Take a look at the video proof that only money matters, not us or the environment.