The Classic Stick, the Boy Toy of Choice 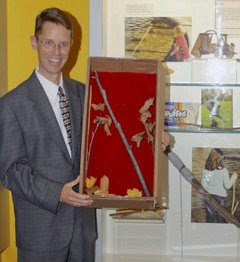 As a father, watching my two boys grow up is like living it all over again, along with a strong desire to let loose and join in. Just to set the record straight, I do join in, but never let loose. The one thing that's driving me crazy; the number of outside sticks I have to pick up around the house, including the ones my puppy chews into a thousand little pieces. Which brings me to the subject of this post: The lowly stick is THE classic toy. The picture to the right with sticks and leaves framed for display is enough to make anyone smile. From CBC News:
Stick, baby doll, skateboard join Toy Hall of Fame
A magic wand, a fishing rod or a royal sceptre?
The lowly stick, a universal plaything powered by a child's imagination, landed in the National Toy Hall of Fame on Thursday along with the Baby Doll and the skateboard.
The three were chosen to join the Strong National Museum of Play's lineup of 38 classics ranging from the bicycle, the kite and Mr. Potato Head, to Crayola crayons, marbles and the Atari 2600 video-game system.
Curators said the stick was a special addition in the spirit of a 2005 inductee, the cardboard box. They praised its all-purpose, no-cost, recreational qualities, noting its ability to serve either as raw material or an appendage transformed in myriad ways by a child's creativity.
Christopher Bensch, the museum's curator of collections said "It can be a Wild West horse, a medieval knight's sword, a boat on a stream or a slingshot with a rubber band. …No snowman is complete without a couple of stick arms, and every campfire needs a stick for toasting marshmallows. "This toy is so fantastic that it's not just for humans anymore. You can find otters, chimps and dogs — especially dogs — playing with it."
Longevity is a key criterion for getting into the hall. Each toy must not only be widely recognized and foster learning, creativity or discovery through play, but also endure in popularity over generations.
The Baby Doll with its realistic newborn features emerged in the late 18th century and has been through hundreds of incarnations. Today's models can crawl, drink and even talk via voice-activated commands.
Posted by John Peterson, Democurmudgeon at 11/08/2008 10:29:00 PM