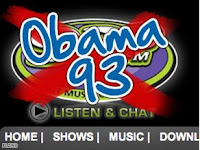 Having been in radio for over 28 years, I'm glad to see creativity has not gone to the wayside like local station ownership.

(CNN) – The most highly rated radio station in Tampa, Florida, temporarily renamed itself from "FLZ 93″ to "Obama 93″ late Tuesday afternoon as the Sunshine State was still casting votes.
WFLZ's program director Tommy Chuck told CNN Radio that the idea is in jest. "It's very light-hearted," Chuck said, "It's a spoof on the whole election thing."

Publicity stunt or not, the top 40 station was blasting "Obama 93″ taglines and promotions out to a vast, highly coveted listenership. Chuck estimates that 420,000 people in the Tampa area regularly hear their broadcasts. In addition to on-air use of the phrase, "Obama 93″ lined the FLZ Web site, where the station's logo was crossed out and replaced with the words.