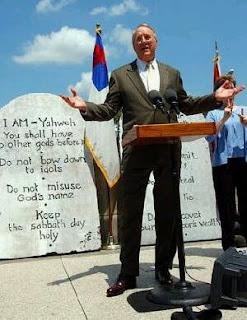 James Dobson's organization, Focus on the Family Action, recently published a letter purporting to offer a vision of 2012 after four years of an Obama administration.

Letter from 2012 in Obama’s America

What will the United States be like if Senator Obama is elected? The most reliable way of predicting people’s future actions is by looking at their past actions. Jesus himself
taught, “You will recognize them by their fruits” (Matthew 7:16). Anyone who has hired employees knows that – the best predictor of a person’s future job performance is not
what he tells you he can do but what he has actually done in the past.

So here is a picture of the changes that are likely or at least very possible if Senator Obama is elected and the far-Left segments of the Democratic Party gain control of the White House, the Congress, and perhaps then the Supreme Court. The entire letter is written as a “What if?” exercise, Same-sex “marriage.”

Court’s stunning affirmation, in early 2010, that homosexual “marriage” was a “constitutional” right that had to be respected by all 50 states because laws barring same-sex “marriage” violated the Equal Protection clause of the U.S. Constitution.

Boy Scouts: “The land of the free”? The Boy Scouts no longer exist as an organization. They chose to disband rather than be forced to obey the Supreme Court decision that they would have to hire homosexual scoutmasters and allow them to sleep in tents with young boys.

Elementary schools: “The land of the free”? Elementary schools now include compulsory training in varieties of gender identity in Grade 1, including the goodness of homosexuality as one possible personal choice. Many parents tried to “opt out” their children from such sessions, but the courts have ruled they cannot do this, noting that education experts in the government have decided that such training is essential to children’s psychological health.

Adoption agencies: “The land of the free”? There are no more Roman Catholic or evangelical Protestant adoption agencies in the United States. Businesses with government contracts: “The land of the free”? All businesses that have government contracts at the national, state or local level now have to provide documentation of equal benefits for same-sex couples. This was needed to overcome “systemic discrimination” against them and followed on a national level the pattern of policies already in place in San Francisco, Los Angeles and Seattle.

Public broadcasting: “The land of the free”? The Bible can no longer be freely preached over radio or television stations when the subject matter includes such “offensive” doctrines as criticizing homosexual behavior. The Supreme Court agreed that these could be kept off the air as prohibited “hate speech” that is likely to incite violence and discrimination. These policies followed broadcasting and print restrictions that were in place prior to 2008 in Canada11and Sweden.
There is so much more here...
Posted by John Peterson, Democurmudgeon at 11/05/2008 11:44:00 AM