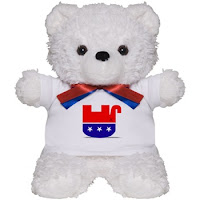 You may have noticed my pronouncements here that the Republican Party is dead. I have been providing video examples of an ideology in its death throws, the deniers and enablers, the hacks and delusional. The cute little huggable teddy to the right, from cafepress.com, is a wonderful sleeping companion for those who want to stop the nightmares.
The other reviews are coming in now, and this one stood out:
RIP: GOP - Thank you, Christian Right!!!! by the national gadfly,
That giant sucking sound that you hear, is the hole in the ground where the GOP used to be. The Christian Right (CR) took them over and instead of spreading out to envelop the entire country, the greedy, intolerant, deceitful hypocrites have killed the GOP. Moderate and independent citizens have spoken with their votes. It turns out that Americans really do want equality for all.
The GOP has collapsed as a direct result of the unholy marriage between the oil / defense industry GOP hacks and religious zealots seeking to install their religion into government. They both sought to fleece the other, like two grifters each assuming that the other one had money. Barack Obama was too tempting for them. They couldn't help themselves but to be stoke fear and hate in an ever intensifying downward spiral. They have lost almost everyone except white racists and apologists for corporate corruption.
The collapse of the GOP promises to be a grand spectacle indeed. There are still a great deal of GOP faithful that still haven't caught on that they are being used by people in their party and religious leadership. Once they start to really figure it out, the party will get even smaller.
I think the final nail in the coffin is this: the world has one universal currency - ideas. The country that can think and create better than every other country will have the advantage in production, quality of life, prosperity, security and longevity. The GOP & Christian Right do not support an educated population. They do not want their autocratic rule to be challenged. We Americans have seen that ignorance is not bliss, it is a cancer. So too, is the GOP today.
Posted by John Peterson, Democurmudgeon at 11/15/2008 01:31:00 PM