Republicans Don't Get It, Example 4: Arnold Gets It, But Can He Convince His Party? 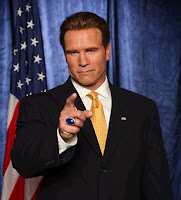 I would normally preface an article like this with a short explanation of why I think the Republican Party's ideology is dead, but I think Schwarzenegger does a pretty good job of that here, as well as how it can change.

LA Times:
Schwarzenegger urges GOP to move beyond ideology: In the wake of crushing defeats for Republicans in last week's national elections, Gov. Arnold Schwarzenegger said Sunday that his party should regroup by moving away from some of its core conservative principles and embracing spending on programs that Americans want.

"I think the important thing for the Republican Party is now to also look at other issues that are very important for this country and not to get stuck in ideology. Let's go and talk about healthcare reform. Let's go and . . . fund programs if they're necessary programs and not get stuck just on the fiscal responsibility."
Schwarzenegger abandoned some of the fiscally conservative views … his failed plan to dramatically expand health insurance in the state … Last week, Schwarzenegger further angered Republicans by proposing a statewide sales-tax increase to balance the budget. Schwarzenegger said … the GOP should support greater investment to build roads and fix schools and fund other "things that the American people want to have done." Republicans should not "always just say, 'This is spending. We can't do that,' " the governor said. "No, don't get stuck with that. We have heard that dialogue. Let's move on."

But Arny’s not out of the “darkness” yet:
He said that Republicans had "a very good party" and that he had no plans to leave it because he agrees with the GOP's push to reduce restrictions on business and remain tough on crime.
He also said that California First Lady Maria Shriver, a Democrat and a member of the Kennedy family, had been running around their house since Tuesday with a cardboard cutout of President-elect Barack Obama, gloating over his victory.

Schwarzenegger, who joked about Obama's "scrawny" physique while campaigning with McCain, said he was "proud" to see the American people elect their first African American president. "Democrats and Republicans should do everything they can to help this man and his administration to be successful."
Posted by John Peterson, Democurmudgeon at 11/10/2008 12:47:00 PM