It's a good news/bad news kind of week for the Republicans; the bad news, at least for them, was the $2.6 trillion projected reduction in health care spending due to the Affordable Care Act. 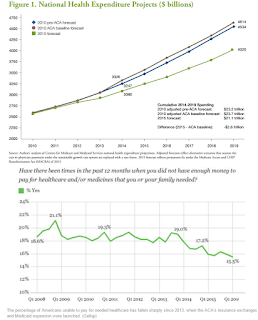 Projections of U.S. healthcare spending growth have come sharply down since Obamacare’s enactment in 2010 ... $2.6 trillion lower than the original post-ACA baseline forecast through 2020, a reduction in projected spending of almost 13%. This is known as “bending the cost curve”: Americans will be spending more in 2020 than they are now, but the rate of increase looks to be significantly slower than anyone expected. The study attributes much of the change, albeit an indeterminate portion, to the ACA.

It’s true that growth in overall healthcare spending ticked up during 2014, reaching 6.2%  ... officials say that by the last quarter of 2015, spending growth had dipped back below 5%. If that’s so, the Urban Institute report says, “spending projections will continue to fall and it will become harder not to attribute at least some of the sustained cost containment to the ACA.”

As bad as that news was for Republicans, they did have some good news; Americans will finally get to see their long awaited "patient centered/free market" health care replacement plan for ObamaCare, something I’ve reviewed here in a previous post. In summary: 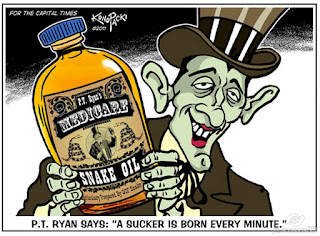 …missing key details and legislative language that would allow independent analysts such as the Congressional Budget Office to assess its cost and impact.

Ignoring the natural aging process and diminished mental capabilities of seniors, Ryan wants them to shop till they literally drop:

…replace the current government-run Medicare benefit with a system of vouchers,“premium support," that seniors could use to offset at least part of the cost of premiums for private health plans.”

Ryan's supposed "free market" plan oddly takes all the risk out of that marketplace with state high-risk pools, so insurers can make a profit from just healthy Americans:

Ryan himself has advocated turning over coverage for preexisting conditions to state-sponsored high-risk pools. As we’ve reported, this is a scam: high-risk pools have been tried before, and they almost always become ruinously expensive and doomed to fail.

Ryan also wants to allow states to cut health services, adding hoops and blockades for those who truly need care:

…eliminate federal rules that establish who should be covered, such as poor children and pregnant women, and which benefits should be offered. Each state would be allowed to decide who would get coverage. 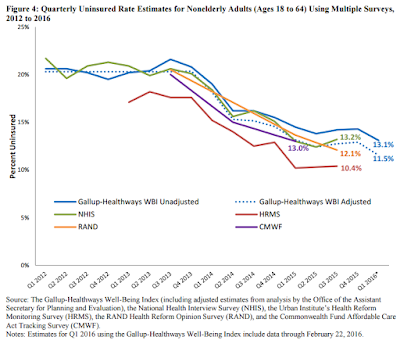