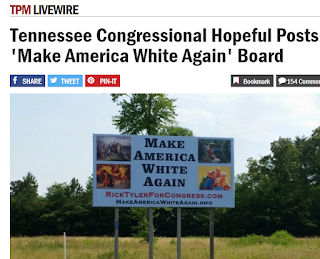 Republicans just needed a little practice under our very first black president, to perfect the rationalization, "I'm not a racist, but I am suffering from white-victimhood."

Sure there's a few bad apples in the Republican Party, but not everyone is racist. The base, the more conservatives "independents" in love with Trump, are just as misunderstood. So what do we make of the picture on the right, is this "one" bad apple or just some poor picked on conservative white guy...you decide......

WRCB: Rick Tyler confirmed that he does not hate people of color, but does believe America "should go back to the 1960s." "(The) Leave it to Beaver time, when there were no break-ins; no violent crime; no mass immigration," he told the news station.

Wow, what a time it was in America. Tyler must have been reading the new "American Exceptionalism" curriculum rolling out in Tennessee schools. But wait, what about the 60's civil rights movement...?


Tyler also posted a billboard for his campaign that features part of Martin Luther King, Jr.'s "I Have A Dream" speech superimposed on a drawing of the White House with Confederate flags around it, according to WRCB.

Some residents wrote in to the news station stating their desire to have the signs taken down. Tyler said that he respects their First Amendment rights but, "I respect their right to have an opinion. I believe the majority of the people in the county like it." The New York Daily News reported that the sign was taken down.