Uh, Walker said it's sad Americans "have such poor choices" for President, after dropping out himself. 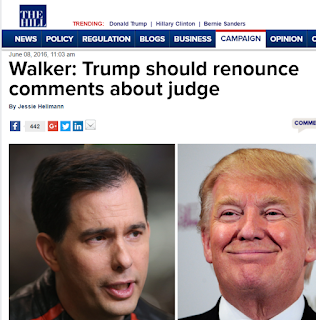 
"It's just sad in America that we have such poor choices right now."


"[Trump] is not yet the nominee. Officially that won't happen until the middle of July and so for me that's kind of the time frame. In particular I want to make sure that he renounces what he says, at least in regards to this judge."

Walker had previously said he would back the Republican nominee, "whoever that is."

Even a wildly racist maniac? Even funnier, the last part of his comment above had a hidden meaning only crazy conservative media could notice. WKOW's Greg Neumann noticed this tweet:

According to Red State:


Rumors are starting to float around that Scott Walker is open to accepting the nomination at the convention, if the wheels continue to come off the Trump train and the rules are changed to unbind the delegate.

"He's not the nominee yet" really can only mean one possible thing: Walker is among the people who are at least entertaining the possibility that something might happen to prevent Trump from becoming the nominee in July.