I had to laugh at the title of this amazing "both sides" do article from The Hill:

That's not good, right? Well, five paragraphs into the story, I did the old "spit take" with my morning coffee:

The report directly compares the fiscal impact of Trump's and Clinton’s proposals, building off the previous non-partisan Committee for a Responsible Federal Budget (CRFB) analyses that examined their proposals separately. The analysis also looks more deeply at the revenue and spending implications of the likely nominees’ policy proposals.


CRFB found that over a decade, Trump's plans would increase the debt by $11.5 trillion and Clinton's would raise it by $250 billion.

Ah, gulp. But you'd never know how far apart Clinton and Trump were if you just read the first couple of paragraphs. Call it media spin favoring Trump:

Donald Trump and Hillary Clinton would both face challenges to put the national debt on a sustainable path under their current proposals but Trump would have to go to far more extreme measures to rein in debt if his policies were enacted.

Neither of the presumptive presidential nominees have put forth ideas to address the debt ... “Both candidates, at a time when our debt is already at record levels, would not put forth a plan that would put the debt on a sustainable path," CRFB President Maya MacGuineas said on CBS’s “Face the Nation” on Sunday. "But that said, the plan of Donald Trump would add much, much more to the debt than Hillary Clinton.”

Here are some details

This will blow your mind...and remember, Republicans will still vote for Trump: 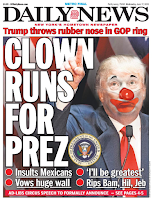 If Trump wanted to put debt on a sustainable path after enacting his proposals, he would have to cut spending by 27 to 37 percent, raise tax rates by 17.5 to 20.5 percentage points, accelerate economic growth by 160 to 390 percent, or enact some combination of these options, according to the report.


In order for Clinton to put debt on a sustainable path, she would have to cut spending by 6 to 15 percent, increase all tax rates by 3.5 to 8.5 percentage points or increase economic growth by 35 to 125 percent. She could also could take a combination of these actions, the CRFB said.

To be perfectly honest, I would much rather have the following problem than anything Trump would unleash:

Clinton has promised not to raise taxes on anyone making less than $250,000, but she would need to raise the top tax rate to 64 percent to stabilize the debt if she only raised taxes on high earners.

Bloomberg View posted a story that came to this not so surprising conclusion:


Paul Ryan's Tax Blueprint Looks a Lot Like Trump's: Ryan and Trump are often portrayed as uneasy allies on a number of political fronts. But when it comes to taxes and fiscal policy, they are kissin' cousins.