Supply Side Tax Cuts take Time to Work, and No, GOP is not trying to Suppress votes...really.

Remember when Republican gave President Obama 6 months after his election to bring the economy back from the Great Recession? He didn't, and since then his policies have been a supposed failure.

Well, according to ALEC and Republican politicians in Kansas, change and economic prosperity on their side of the aisle takes a whole lot longer because "there's a lot going on," and "tax cuts can take 3 to 5 years to show positive outcomes"...sure they do: 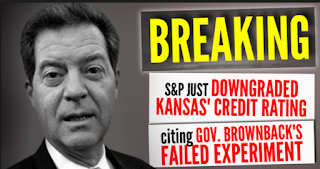 Led by Republican Gov. Sam Brownback and a Republican legislature, Kansas has dramatically cut income taxes on the theory that lower tax rates would spark economic growth. Instead, the Kansas economy has grown at a slower rate than the national average.

While Democrats point to Kansas as an example of tax cuts gone wrong, Republicans are playing a waiting game, arguing the cuts just need more time to produce the intended effects.

Jonathan Williams of the American Legislative Exchange Council, a free-market group focused on state legislation, said that when the tax cuts went into effect, there were no revenue offsets implemented, leading to shortfalls. Williams said these types of tax cuts can take three to five years to show positive outcomes.

“There’s a lot going on, and people are confusing correlation versus causation,” said Williams, vice president for the Center of Fiscal Reform at ALEC. “In reality, there are a lot of underlying problems.”

Yet, state budgets don’t have the luxury of time, according to Norton Francis, a senior research associate at the Urban-Brookings Tax Policy Center.

Kansas is on the cutting edge of Voter Suppression techniques: 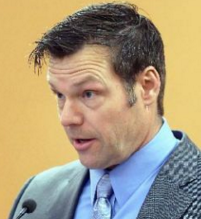 Kansan residents who did not provided proof of citizenship when they registered to vote can cast ballots only in the federal races for president, U.S. Senate and House — but only if they registered to vote at motor vehicle offices. That includes voters whose “motor-voter applications” were cancelled after 90 days because they didn’t circle back and provide the proof of citizenship after initially turning in applications.

Secretary of State Kris Kobach is trying to keep everybody who doesn’t provide documents proving their U.S. citizenship out of the voting booth, but a federal judge says that violates the National Voter Registration Law, commonly called the “motor-voter law,” because Congress designed it to encourage voter participation by making it easy to register when people get their driver’s licenses.

The federal courts ordered Kobach to let these “motor-voter” voters whose registrations were cancelled or suspended to cast ballots in the upcoming federal elections while his appeal plays out. A federal appeals court will hear oral arguments in August, but it is not likely to rule before the elections.

Naked and Raw Voter Suppression: Come on folks, how obvious do you have to get:


Gov. John Kasich vetoed a bill would have required anyone requesting an extension of Election Day polling hours to post a bond equivalent to what the additional time would cost the state. If a court overturned the extension, whoever filed the request would forfeit the bond, which could easily total tens of thousands of dollars.

“Prohibiting state court judges from exercising their discretion to waive the bond requirement in only these types of cases is inequitable and might deter persons from seeking an injunction to allow after-hours voting when there may be a valid reason for doing so,” the governor said in his veto message.

The sponsor of the bill, Sen. Bill Seitz, blasted Kasich's action. Kasich's statement that current judicial rules allow bond requirement to be waived, "although rogue judges have ignored the plain language of the rule and done so.

In April 2015, Kasich levied a line-item veto on an item tucked into the state transportation budget that would have required out-of-state residents who register to vote in Ohio to obtain an Ohio driver's license and vehicle registration within 30 days ... discourage more than 115,000 out-of-state college students -- most of whom are thought to be Democrats -- from voting in Ohio by requiring them to spend a $75 or higher "poll tax" on the documents.