The Paul Ryan quote making the rounds now tells us how little he knows about the private health care system we finally left behind.

I'm blogging about this again, hoping Democrats use any one of these points as ammunition against Republicans. I haven't had any luck yet.

It’s almost dangerous to be this out-of-touch: Ryan didn’t know premiums were out of control before the ACA, that Republicans were the ones pushing high deductible plans to discourage health care “over use,” and the maze of tangled insurance restrictions, co-pays, exemptions, dropped coverage's and premium increases make government regulation pale in comparison. And his weird shot at “waste, fraud, and abuse?” Ah, that’s the private sector scamming the government Paul. So that’s what makes going private so counter-intuitive and ideologically driven.

Finally, Ryan’s plan will actually force tens of millions of people off “the plans they like.” Never fear, ObamaCare made Republicans do it: 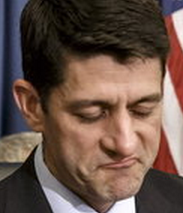 “OBAMACARE IS MAKING THINGS WORSE BY THE DAY. IT DRIVES UP PREMIUMS AND DEDUCTIBLE COSTS FOR INDIVIDUALS, FAMILIES, AND BUSINESSES. IT FORCES PEOPLE OFF THE PLANS THEY LIKE. IT FUELS WASTE, FRAUD, AND ABUSE. AND IT CANNOT BE FIXED. ITS KNOT OF REGULATIONS, TAXES, AND MANDATES CANNOT BE UNTANGLED. OBAMACARE MUST BE FULLY REPEALED SO WE CAN START OVER AND TAKE A NEW APPROACH."  Ryan

The article below dissects Ryan’s plan in a common sense, very simple way. You'll notice everything is profit driven, just the opposite of every other civilized industrial country in the world repulsed by the idea:

For starters, it contains the often popular Republican idea of tort reform. In short, this would limit how much compensation one could receive if a doctor makes a mistake and ends up hurting them or a family member during a procedure. Since doctors and other medical personnel have insurance for this sort of thing, tort reform would end up benefiting insurance companies more than the average person. You’ll notice that’s a theme with this new healthcare plan.

Another popular Republican proposal that has made its way into this plan is allowing people to buy insurance across state lines. This sounds like a good idea in theory, as it would give people more choices. But there is one major flaw that the Republicans haven’t addressed, which is the race to the bottom. Since each state has its own rules and regulations regarding health insurance, it’s very likely that insurance companies would simply set up shop in the state that had the least amount of regulation, resulting in less protection for consumers.

Of course, it wouldn’t be a Republican healthcare plan without an attempt to attack Medicare. So let’s look at the latest Republican attack on one of the most popular programs in America. For starters, Ryan intends to raise the eligibility age to 67. Republicans also intend to phase out the current system and replace it with a “fully competitive market-based model—known as premium support.”

As I've mentioned before, aging diminishes our mental capacity to deal with complicated things like insurance policy small print and changes. To be unaware of this is to be horribly cruel.

I also stumbled across this tidy summary at the Business Insider:

2. Allow Americans to purchase health insurance across state lines, so they can find cheap, catastrophic plans in states that allow companies to sell coverage with limited benefits.
3. Give Americans who don't get insurance through their employers, Medicaid, or Medicare a refundable tax credit-which is to say, a monthly subsidy-to help them purchase said catastrophic coverage.

4. Expand tax-exempt health savings accounts so that people with cheaper insurance can (maybe) afford to pay out of pocket for routine care, like check-ups.

Which begs the question...

Last year, the average Obamacare insurance subsidy was $268 per month. If the ACA's subsidies are supposedly an unaffordable expense for the federal government, as Republicans generally seem to feel, it is difficult to imagine that they really plan to give people enough money to buy a "typical" pre-reform plan. What they actually intend is left to our imaginations.

The Republican health care plan, as it has been for years now, is to give Americans a small amount of money capable of helping them purchase cheap, not very comprehensive insurance.