Walker's secret email system not as bad as Hillary's.

It would be easy to say Scott Walker resents Hillary Clinton she survived politically while Trump beat the pants off of him over his own horrific jobs record in Wisconsin; and second, Hillary could be our next president.

Walker's recent twitter tantrum reveals how small he really is, and how the politics of resentment has influence and grotesquely twisted Walker's world view, consuming his entire political agenda.

Walker is so detached from reality, that he tweeted the nearly identical words the media used to describe his own illegal email system:

Remember this headline in the Milwaukee Journal Sentinel?

In fact Walker's tweet tantrum was addressed over a year ago by Bloomberg’s Joshua Green:

March 9, 2015: Walker’s attack shows quite a bit of chutzpah, because he himself got caught running a secret e-mail network for his inner circle of advisers when he was Milwaukee County executive. In their illuminating book, More Than They Bargained For: Scott Walker, Unions, and the Fight for Wisconsin, Jason Stein and Patrick Marley reported (they) caught her posting online political comments supporting Walker while she was supposed to be working on the taxpayers’ dime. As Stein and Marley wrote: "When the Wink story broke, Walker’s deputy chief of staff, Kelly Rindfleisch, quickly dismantled a private Internet router set up in her office, which was twenty-five feet away from Walker’s. 'I took the wireless down,' she wrote in an e-mail to Tim Russell, who had served as Walker’s deputy chief of staff before Rindfleisch. Russell, then working as Walker’s housing director, had initially set up the router for Wink and Rindfleisch to use, prosecutors alleged.

Walker e-mailed Russell that night, telling him he had talked to Wink and felt bad about what had happened. “We cannot afford another story like this one,” Walker wrote to Russell. “No one can give them any reason to do another story. That means no laptops, no websites, no time away during the work day, etc.”

But Walker's preoccupation with the politics of resentment and class warfare, hit this high point of envy the other day: 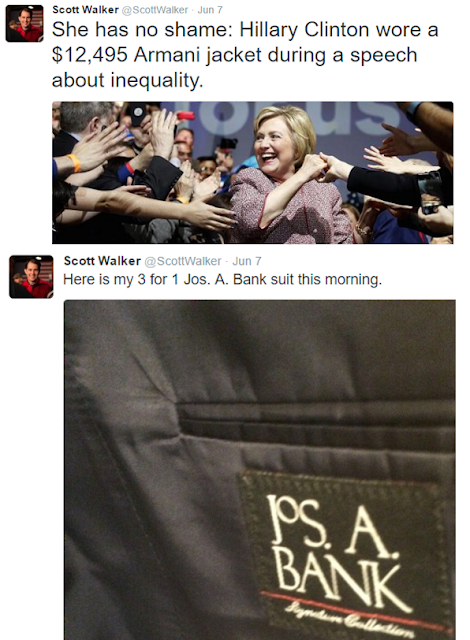