While raving gun hobbyists push their "rights" on everyone else, their old argument that guns would make America safer has proven to be false. Even more frightening, the freedom to carry a gun is now canceling out the freedom to not carry a gun, like the push to end "gun free zones" and allow guns in schools, colleges, parks, streets, sidewalks...etc..

Again, the only way we can be a safe society is to be an armed society. But as Slate's Dahlia Lithwick wrote recently: 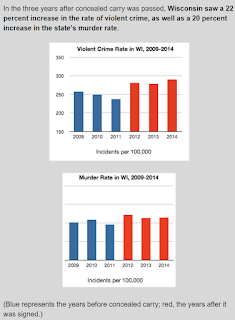 But the gun crowd's rejection of this argument, in the face of mass shootings and random executions in neighborhoods all across America, is driving our once civil society off a cliff.

If you remember Saturday Night Live's competitor, Friday's, then you might remember this great bit featuring Larry David (Seinfeld & Curb Your Enthusiasm) and Michael Richards (Seinfeld), playing the founding fathers trying to write the Constitution and Bill of Rights. David's take on the 2nd Amendment is especially ironic: 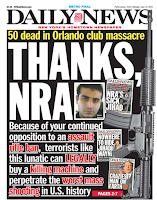 The Second Amendment says this: “A well regulated Militia, being necessary to the security of a free State, the right of the people to keep and bear Arms, shall not be infringed.” For most of U.S. history, that was understood to mean that the freedom guaranteed by the Second Amendment was precisely what it said: the right of the people of each state to maintain a well-regulated militia.

So clearly and unequivocally held was this worldview that no less a liberal squish than Richard Nixon Supreme Court appointee Warren Burger said after his retirement in 1991 that the Second Amendment “has been the subject of one of the greatest pieces of fraud—I repeat the word ‘fraud’—on the American public by special interest groups that I have ever seen in my lifetime.”

Perhaps most famously in a 1939 case called U.S. v. Miller. That ruling said that since the possession or use of a “shotgun having a barrel of less than eighteen inches in length” had no reasonable relationship to the “preservation or efficiency of a well regulated militia,” the court simply could not find that the Second Amendment guaranteed “the right to keep and bear such an instrument.” Period, full stop. And that was the viewpoint adopted by the courts for years.

Forgetting over 2 century's of history, in 2008, and after decades of special interest money and propaganda, Justice Scalia and Thomas took the leap...: 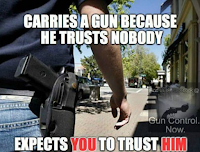 the Constitution—cannot be subject to any reasonable restriction Constitutional rights are subject to every sort of condition and limitation, and as Scalia himself noted in Heller, “the right secured by the Second Amendment is not unlimited.” He even went on to list some reasonable limits. It is a sick joke of our democracy that after every mass shooting we must tell our children that the Framers gave us this precious gift of liberty, more valuable than their lives, and that we are stuck with it. This is the opposite of freedom. It is slavery by choice.


Family of AR-15 Inventor Eugene Stoner: He Didn't Intend It for Civilians. "Our 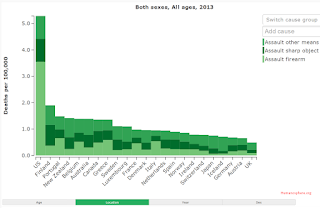 father, Eugene Stoner, designed the AR-15 and subsequent M-16 as a military weapon to give our soldiers an advantage over the AK-47," the Stoner family told NBC News late Wednesday. "He died long before any mass shootings occurred. But, we do think he would have been horrified and sickened as anyone, if not more by these events."

The ex-Marine and "avid sportsman, hunter and skeet shooter" never used his invention for sport ... he never even owned one. And though he made millions from the design ... it was all from military sales.

His family said Stoner was "focused on making the most efficient and superior rifle possible for the military. What has happened, good or bad, since his patents have expired is a result of our free market system," Stoner's family said. 'Who now is benefiting from the manufacturing and sales of AR-15s, and for what uses?'"

In all, an AR-15 style rifle has been used in at least 10 recent mass shootings.

“A well regulated Militia, being necessary to the security of a free State, the right of the people to keep and bear Arms, shall not be infringed.” 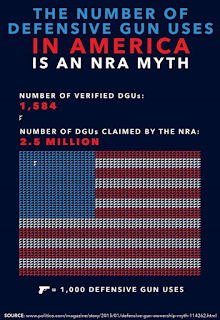 No matter the interpretation of every other word and phrase after the first three words, the entire context of the amendment is that it will be a regulated right. Through this lens, the Second Amendment is barely even comparable to the First Amendment in terms of what rights it enables. There is simply no language in the First Amendment that regulates the right to free speech... and yet we still regulate speech despite the unassailable strength of the the First Amendment constitutional language.

The upshot? The Constitution itself provides the guidance — and mandate — to not just regulate militia (i.e., groups of people) and arms, but to regulate them well. Seeing as the right to bear arms has been implemented pretty effectively in America, perhaps now it’s time to start implementing regulation well too, as the Constitution also mandates.

Gun defenders often point to general homicide rates, which don't give the actual total number of guns deaths. Interesting note: Republican opposition to health care kills more Americans than guns. Nice party huh? So here's what they want to deny, at the risk of putting everyone else in the line of fire: 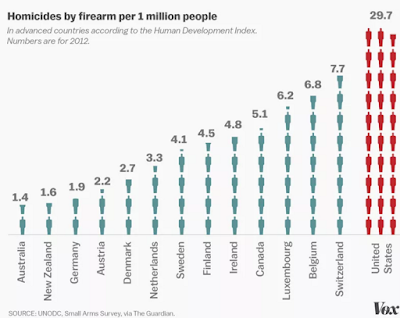