DNR Secretary Cathy Stepp wants department to be more like managing a McDonald's.

The big story to come out of the meeting between the DNR board and Walker's embarrassingly incompetent Sec. Cathy Stepp, is her oddly bizarre comparison to her oversight of Wisconsin's natural resources to her former job as a McDonald's manager.

Apparently, the state needs to pare down regulation to the level of a McDonald's responding to a sudden busload of dollar menu orders. WSJ: 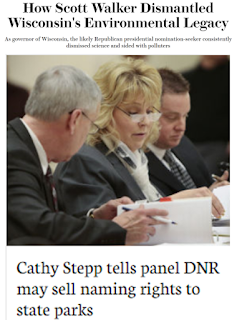 Board member William Bruins said the department has known for five years that the cost in staff time of regulating concentrated animal feeding operations far exceeded the revenue the state budget allows it to keep from fees CAFO's pay. “So in the five years has there been any effort by the department to correct that?”

Stepp recalled her days as McDonald's restaurant manager as she talked about how state employment rules have hobbled the DNR. Stepp said she could quickly mobilize her fast-food employees when a busload of customers arrived unexpectedly, but the DNR can't react that nimbly to retirements.

Yea, why can't running the DNR be like McDonald's? My god I wish I were kidding. All of this is happening because Walker and Stepp decided they were no longer going to spend valuable taxpayer dollars on trying to stop the pollution of our lakes, streams and drinking water.

But funding cuts were intentional. But it's more shocking to hear the DNR is to "complicated" for Stepp. Only now, under fire for violating her own departments rules...

Stepp said she has discussed those challenges with her boss, Gov. Scott Walker, and it's possible she could request an increase in revenue this year. But Stepp said she is mindful that other state agencies ... are also need money. And the Legislature wants requests for more tax dollars only as a last resort, she said.

Some of the problems in regulating water quality stem from employee turnover and job vacancies at DNR, she said. It can take up to two years to train a new employee to work proficiently with complicated laws and rules governing pollution permits, said Patrick Stevens, the DNR's top administrator for regulation of industrial and municipal pollutants.

Another intended consequence of Act 10:


The department fell far behind in permitting when a huge wave of retirements swept through state government, including the DNR, around the time Republicans took over state government and eliminated most public sector union rights in 2011.