Scott Walker isn't going to do anything about preventing mass shootings, or any other kind of gun violence. A definite sign of sociopathic behavior? You bet. But what could Walker say that would please the "freedom and liberty" loving base of low information voters packin' heat in public?

Blame the public for not being vigilant enough, but then reassure everyone that whatever we are doing now, IS working. Walker must have missed the GOP memo where the U.S. must defeat ISIS first. That won't take long, will it?

Scott Walker’s contradictory throwback reasons for doing absolutely nothing about the gun carnage and mass shootings in the U.S. is short of insulting. Surprisingly, he didn’t include locking up mentally ill Americans, since we now know they’re not actually a noticeable part of the problem: 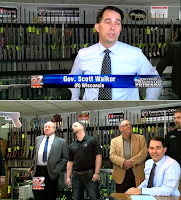 Gov. Scott Walker says increased public vigilance is key to stopping terrorists like the shooter who killed 49 people in an Orlando gay club on Sunday.

“The biggest issue for us is just trying to figure out how do we work together? How does the federal, state, local officials work together with the public as a whole to try and identify concerns in advance and prevent them from happening."

Wow, why didn't law enforcement think of that?

Repeating the most incredibly irritating, irresponsible, and hopeless position ever uttered by a freeloading career politician: