The police state is right around the corner folks, if Sheriff David Clarke gets his way.

Our spend thrift party of punishment, Walker's Republican Authority, really has no concept of money.

Fake Democratic poser, right wing favorite Sheriff David Clarke, kind of made that obvious the other day when he called for the creation of an army of law enforcement officers to secure Milwaukee.


"I still maintain we don't have enough boots on the ground in this city and county to effectively deal — to effectively initiate strategies. I know that cops matter."

What, our armed civilian militia has ended up making our streets more dangerous to the point of needing 600 new cops? Of course underlying all of this is the cost, which for Clarke and other conservatives isn't a problem since there's so much extra money out still being spent on public services: 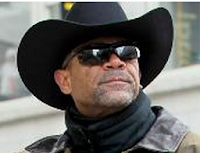 Clarke said there needs to be a comprehensive "action plan" to combat violence in Milwaukee. He also demanded an end to what he called "social engineering experiments" like electronic monitoring programs and deferred prosecution and warned that "hot-spot policing" works only on a limited basis because police need to have a constant visual presence in the community.

Ignoring the Constitution when it doesn't fit their desired outcome, tea party losers like Clarke don't seem to mind creating a POLICE STATE "lawfully." I'm not making the following up:

He urged for "stop, question and frisk" policing, 100 searches per night of homes where those on parole are living and aggressive traffic stops targeting repeat offenders.


"We need to rain holy hell on these individuals — lawfully. We don't need to violate anybody's rights to do this."

Nobody could be this deep in denial and not be a danger to himself and everyone around him.

Getting back to what Clarke's insane plan would cost, he believes $40 million is do-able, but can't explain where he'll get it:

Ald. Terry Witkowski asked Clarke how the city would pay for 400 new officers, estimating it would cost Milwaukee about $40 million annually. Witkowski also noted that state officials have limited the city's ability to increase taxes.

The sheriff said it was the job of city leaders to prioritize spending and come up with funding for public safety. "Right now, I could drive around this city for two hours and never see a cop. They are understaffed and under siege, just keeping up with calls for service."

Milwaukee Police Chief Edward Flynn called Clarke "irrelevant to my work." "I'd love to have 400 more cops, if somebody could come up with a way to pay for them without breaking the backs of Milwaukee taxpayers," Flynn said. "There's no there there."
He suggested Clarke talk to "his good friend" Gov. Scott Walker about restoring money that's been cut from Milwaukee's shared revenue payments. "Just restore state aid and we'll have a discussion," Flynn said.

Perhaps the Public Safety Committee should have asked Clarke's how he's spending taxpayer dollars the Sheriffs Department. That must be an ugly mess of twisted priorities.
Posted by John Peterson, Democurmudgeon at 6/25/2016 01:53:00 PM