Republicans love to show Obama golfing during a crisis, no matter what happens in the world, big and small. It's the ultimate in gotcha politics. 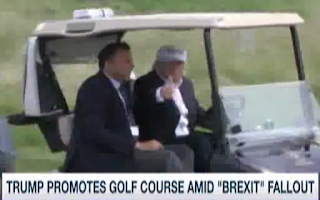 As inane and ridiculous as those moments have been, their presumptive candidate for president set a completely new standard in bad photo op moments.

Not only did Trump not think to consult his foreign policy advisers right after the Brexit vote, that was embarrassing enough...:


Trump: "Well I've been in touch with them, but there's nothing to talk about."

...then he got Scotland's position on that vote completely wrong. He even congratulated them for declaring their independence from the EU.

Not a forgivable moment by a guy trying to be presidential. So where are the Republicans now?