At least one right wing propagandist "news" sites knows who the real Paul Ryan is. Ironically, the only time they're forced to be honest about a fellow Republican is when one of their own isn't bat shit crazy enough. The source is DownTrend.com.

Check out what Downtrend said about the real Paul Ryan, the one duped voters in his district call their own:

Congressman Ryan has always been a calculating little weasel and overly trusting conservatives have been hornswoggled by the media on this guy who is nothing more than a sober version of Boehner who just scammed everyone to get the gig along with shorter work hours. He is a Trojan horse for every rotten globalist trade deal, open borders and the continuing use of the government as a redistribution of wealth machine to special interests. Meet the new boss, same as the old boss. 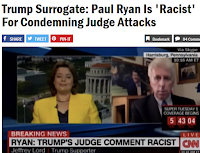 “And so, in the end, [Paul] Ryan is not merely a captive in Trump’s hostage video. He is a politician caught between his rejected ideology, and the racist pseudo-populism of an interloper who emerged from the political and moral void he and his party helped create.” – Richard North Patterson

Who needs The Onion when you've got a site filled with stories like ones in this screen capture: 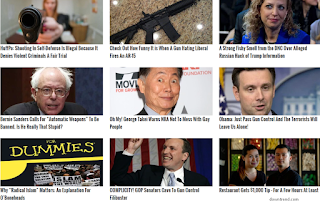