Walker's refusal to fix Roads is scaring everyone now, as we all head into the repair shops.

Like almost every societal problem we’re seeing now, from health care and clean drinking water, to transportation, Republicans have either caused the problem or made them worse by refusing to spend money to fix things.

The deplorable road conditions in Wisconsin focused our attention on just how bad Scott Walker and the Republicans are at governing. They're ideologically driven machines, with winning as the only desired outcome. If we can't fix this easy one, god help us.

Even the Walker cheer leading squad at Right Wisconsin have come to the realization that spending cuts can even affect them. It's not so much fun being on the receiving end, is it? Time to rewrite a few mindless talking points guys?

As reported earlier this week by the Wisconsin State Journal, Governor Scott Walker’s transportation secretary had this to say regarding the impact of not increasing the gas tax or vehicle registration fees:


"That non-backbone system, which is about 90 percent of the state highway system, is going to continue to deteriorate in condition.”

Got that? Ninety percent of the state’s roads comprise the “non-backbone system.” Give Secretary Mark Gottlieb credit for not mincing words in explaining the impact of Walker’s directive that Gottlieb not request higher taxes or fees in his 2017-19 budget request.

When your own party gives up trying to fix things, you know you've got a massive problem.

I found the following story in a tweet by Rep. Robin Vos, from the right wing site Daily Takes: 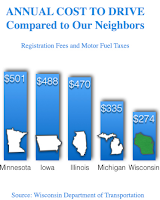 It’s time to get serious about the Wisconsin road, bridge and highway crisis, and it’s time for conservatives to lead the way toward resolving it.

No, really, ya think?

And everybody knows that not fixing our roads simply shifts the responsibility and cost from the state to you and me:

Bad roads are a hidden tax, which may be convenient for politicians, but not so much for the rest of us. A recent nonpartisan report indicates vehicle maintenance, avoidable accidents and congestion delays ding Wisconsin drivers for more than $2,000 a year.

Which brings me to the following possible solution posted in the mailbag section of the Wisconsin state Journal by Jim Sparks:


My 5-year-old vehicle has had the front end suspension replaced two times at a cost of well over $2,000. Gov. Scott Walker’s fear of adding a small gasoline user tax, because doing so may upset his no-new-taxes supporters, requires me to pay a personal auto maintenance fee to support his misguided ideology.

I know roads and bridges are very expensive. But I have a plan that will let the governor and short-sighted Legislature save money by not fixing the roads. I propose Gov. Walker establish a special fund called “The Wisconsin Road-related Disabled Vehicle Fund.” This will allow those of us who have front-end breakdowns to send our bills to the governor for reimbursement. It sure would be a lot cheaper for the state than fixing the roads.


If we just continue to hold tight under the misguided notion of what is conservative and therefore don’t invest in resolving the curret crisis, over the next decade there will be 250 fewer new road projects, 800 fewer miles of roads will be rehabilitated or improved (thus increasing the miles of poor roads by 81 percent). This means 26 percent of all highways in Wisconsin will be in poor condition by 2027.

Let’s be clear. These numbers are not some hype from the special interests, these numbers are the sober, honest analysis of Governor Walker’s Department of Transportation.