Leave it to our sociopathic Speaker of the House Paul Ryan to calmly dismiss the call for common sense gun background checks and revised terrorist watch list, and call the Democratic outrage a "publicity stunt." Well, that's how his party would see and exploit the idea: 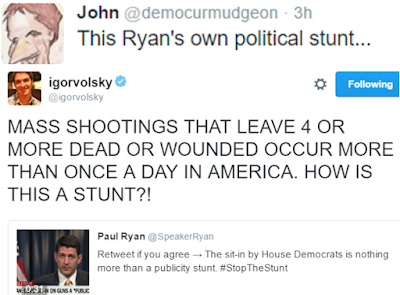 The Democratic sit-in was described this way by a caller on C-Span today:

Caller: "...and as to the Representatives taking...basically taking the House hostage....the peoples house....it doesn't have a place on the floor of the House. They can't expect leadership to give into them, when they're basically holding Congress hostage. These are people paid to represent us, and to be there...this is more like college kids taking over a campus and saying, we're going to do this."

An NRA radio show came out with this gem describing Democratic efforts to pass reasonable and popular gun control:

Our "freedom and liberty" party of cafeteria constitutionalists are starting to rationalize the sit-in this way:

One of the dumbest men alive, Louie Gohmert ignored all the other mass shooting and instead focused on "radical Islam."