The unintended consequences of the Supreme Court decision that overturned centuries of common sense 2nd Amendment decisions, has now given us this:

The liberal progressive side of the aisle is now picking up arms to fight radicalized right wingers: 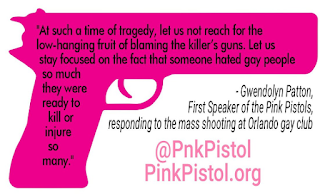 NBC News: The Pink Pistols, a national gun club for gays and lesbians, wants their community to take up arms in self defense in the wake of a deadly shooting massacre at a gay nightclub in Orlando.

Spokesperson Gwendolyn Patton, who argues that the LGBT community needs to exercise their Second Amendment rights in order to defend themselves, says the group saw membership soar from about 1,500 members before the Orlando shooting on Sunday to 3,500 on Monday.

The Pink Pistols describes itself as "an international LGBT self-defense organization" that advocates for gay people to acquire concealed carry permits. Group activities include bringing in NRA-certified instructors to help train members at shooting ranges and engaging in political activism. Pink Pistols is generally made up of gun-loving LGBT individuals, but also includes straight ally members. "The intent isn't to kill. The intent is to stop. I don't shoot to kill, I shoot to stop."

A majority of Americans in cities and communities nationwide are now losing the freedom and liberty they once had to to go gun free. Oddly, as more groups give in guns, some see this as a "uniting America" moment:


Nicki Stallard is a transgender woman and the head of the San José, California chapter of the Pink Pistols (is) noticing gun owners helping gays arm themselves against violent attacks - many conservatives are helping the people that they disagree with on social issues.

"They're setting aside their differences. An attack on this gay guy is an attack on a fellow American," Stallard said. "This evil hate, ironically, is uniting America and eliminating hate amongst everyone else."