Walker creates Negative and Bad Things, complains the News is Reporting it!!!

Proving once again that nothing is Scott Walker’s fault, ever. WSJ:

Walker on Wednesday attributed his low job approval rating to the media’s focus on negative news. “The headlines are always about negative and bad things so it’s no wonder that people feel that way in the polls.”

And why is there “negative news?”

Could it be failing environment oversight of water and our crumbling state roads? Maybe it was when Walker was caught lying about not trying to change the “Wisconsin Idea?” Or usurping local control? Running for president with Wisconsin in his rear view mirror? Don’t get me started.

Oh, I’d like to welcome Walker to his own party’s campaign of personal and political destruction. 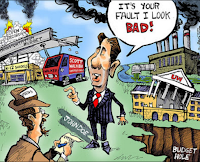 Sticking with Walker’s well research anecdotal stories, from successful corporate kiss asses, things are so much better than the actual news media's reporting:

“Generally we hear good things (about the direction of the state) at the listening sessions,” Walker said.

Gee, you think big business wouldn't be happy with WEDC and zero taxes? It’s interesting to note the media has no way of knowing what Walker is really hearing in his "listening sessions:"

The media have not been allowed to attend the private meetings.

Way back when Walker ran for governor, this cartoon warned us all what was about to happen: 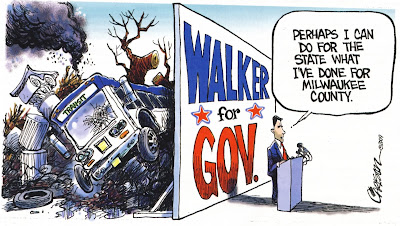