It was bound to happen; stagnant and declining wages are turning our once middle class suburbs into crime ridden pockets of poverty.

The Atlantic: According to Confronting Suburban Poverty in America, by Elizabeth

Kneebone and Alan Berube of the Brookings Institution, across much of the country, poverty is increasingly a problem found in the suburbs. The number of poor in the suburbs surpassed the number of poor in the cities in the 2000s, and by 2011, almost 16.4 million suburban residents lived below the poverty line. But poverty has increased so quickly in some suburbs that these areas are ill-equipped to deal with it, she said. “Many of these communities lack the infrastructure, safety-net supports, and resources to address the needs of a growing poor population,

And with wage freezes, right to work, union busting and Scott Walker policies, Wisconsin doing just what you would think:

Get a little whiplash from that?

Our once thriving suburban neighborhoods are now declining. They're no longer free from the same urban problems.

Thank you Republicans, and while you're at it, blame somebody else like always...maybe a Democrat: 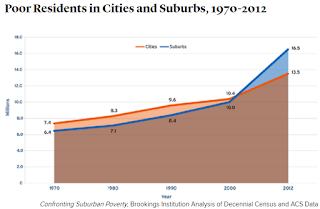 JS: A suburban Republican lawmaker, State Rep. Janel Brandtjen (R-Menomonee Falls), ripped into Milwaukee Mayor Tom Barrett and said she would push for funding cuts to the city unless steps are taken to slash Milwaukee's crime rate … in the wake of a high-profile Milwaukee carjacking that ended with a chase into Washington County and the arrest of five juveniles.

"Last week homeowners in Washington County were held hostage in their homes by the actions of five young criminals from Milwaukee," Brandtjen wrote. "All night long the Milwaukee police, SWAT teams and law enforcement from Washington County combed the darkness for five youths with guns. Families were forced to unlock their gun cabinets and instruct their loved ones to shoot to kill.”

It's an NRA dream come true. Gee, isn’t that what real Americans are supposed to do with their firearms? Shoot to kill.

What Rep. Brandtjen doesn’t get is how her party’s economic supply side bumbling is depressing wages and turning our once thriving suburbs into poverty stricken neighborhoods. The Atlantic reported how middle class neighborhoods are turning run down slums with rising crime rates. Brandtjen should a little reading first, instead of taking the easy way out by blaming Mayor Tom Barrett:

The seven-year freeze in Wisconsin’s minimum wage has contributed to the widening income inequality in our state ... Wisconsin had a faster decline than any other state in the percentage of households in the middle class during the period 2000 to 2013.

So what was obvious to Democrats and most Wisconsinites struggling to get by, is now suddenly a revelation that must be...the Democrats fault, someone like...Mayor Barrett:

"The violence and the crime that has plagued Milwaukee for decades has now begun to spill over into Milwaukee's suburbs. I lay the responsibility for this growing and out of control problem at the door of the mayor's office. Mayor (Tom) Barrett may not care about the safety of his family but I certainly do care about mine."

"The people of southeast Wisconsin will not sit by and watch your administration destroy the entire region with failed liberal policies and a 10 second 'Tommy Tough Talk' sound bite. If you do not fill the hundreds of vacant police officer positions, apprehend and arrest car thieves, demand prison for repeat criminals and start standing up to the judges who let repeat offenders off easy, you will be in my opinion 'assisting and enabling' the very criminals who are responsible for the record number of shootings, carjackings and murders."

The solution for all of these mind numblingly expensive "tough on crime" solutions, is to punish Milwaukee with funding cuts. Brilliant:

Brandtjen said she would be "openly advocating for funding cuts to Milwaukee unless steps are taken to dramatically cut crime in Milwaukee. "Our 7 year minimum wage freeze and right work-for-less law can't be the problem....I will no longer sit by while you destroy Milwaukee and its flourishing suburbs. I cannot justify financing your failed policies in Milwaukee until you take public safety seriously."
State Rep. Mandela Barnes (D-Milwaukee) called Brandtjen's statement irresponsible, saying it underscored an anti-Milwaukee sentiment among Republicans. "This is a top-down message from the de facto leader of the Republican Party, Donald Trump," Barnes said.

"From what I heard, they're going to build a wall around Milwaukee and Milwaukee is going to pay for it," Barnes said, an apparent reference to Trump's proposal to make Mexico pay for a wall on the border with the United States.

Cutting state funding for Milwaukee would make crime worse, Barnes said. "She would just make a bad situation worse. I don't think she truly understands what she said or what she means."